Warm in the North Island, roaring northeasterlies in Christchurch 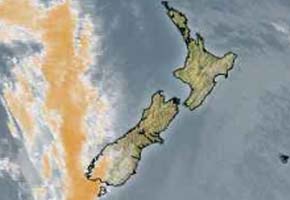 The weather still isn’t too exciting today however it is nice and pleasant in some regions which at times can be excitement enough. Of course exciting weather may depend on what you are up too.

Temperatures in Wanganui, the Bay Of Plenty and Waikato northwards are floating between 16 to 18 degrees, winds are fairly light and there is plenty of sun which is fantastic. A bit cool on the east coast of the North Island with easterlies and some cloud.

In the South Island winds are lightest about Nelson and Hokitika northwards along the West Coast, also in Southland. Invercargill and Nelson take out the top temperatures in the south at the moment with both sitting on 15.5 degrees. Along the east coast it’s a bit cool with northeasterly winds making it a bit of a blah day especially in the likes of Kaikoura and Christchurch where the wind is peaking at 40 km/h at times but mostly averaging at 20 km/h.

High cloud is spreading across the lower south due to an approaching front and areas of drizzle will be entering Fiordland at the moment.

There is potential for fog tonight from Auckland down through much of the island, the biggest fog candidates being the Waikato and the Central North Island as it is more sheltered.

Great Spring type day today here in Wellington.
Was pretty coll walking to work at 3.30am this morning but the full Moon looked fantastic in the western sky over the city.
Might get to mow the lawns afterall.
Have a great weekend all.

Looks like it got to 15 degrees then a SW wind has come in and cooled things down a little, interesting it’s done that again in Wellington as it did that not long ago. The whole airflow doesn’t even really look condusive to a SW wind there but it is, must be some small meso scale issue.

Next week (after monday) will be the reverse,Roaring SW in Auckland and lighter winds in the east.

Heck yeah! Can we come up with a pine needle accumulation gauge perhaps? hehe.

Use “new world” bags,the small ones then progress to the bigger ones then clean sacks depending on longevity.