Warm, dry week ahead for inland NSW, then NZ 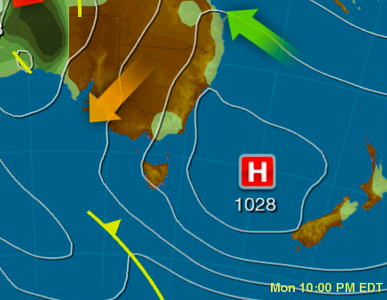 The next week will be mostly warm and dry across inland areas of NSW, although a rain-bearing system may be on the horizon.

A near-stationary high pressure system over the Tasman Sea will prevent any significant rain from affecting western NSW between now and the middle of next week.

While areas east of the ranges are likely to see showers thanks to onshore winds, most inland districts will pick up little if any rainfall during the next six or seven days.

Another notable feature of the stubborn Tasman high will be gradually rising maximum temperatures west of the ranges.

As the high sluggishly shifts towards New Zealand during the next week, warmer northerly winds will start to develop over inland districts of NSW.

Daytime temperatures in the state’s west are likely to reach the mid-to-high thirties during the first half of next week and some areas could experience their warmest days in about eight months.

Hay’s maximum temperatures of 24-25 degrees at the start of this week should rise above 30 degrees during the remainder of this week and could reach the mid thirties early next week.

Albury is a good chance to see its first 30 degree day since March before next Wednesday.

Looking ahead, there are signs that a low pressure trough will move across the state during the second half of next week. This system has the potential to produce widespread rain and storms and should bring a welcome drop in temperatures.