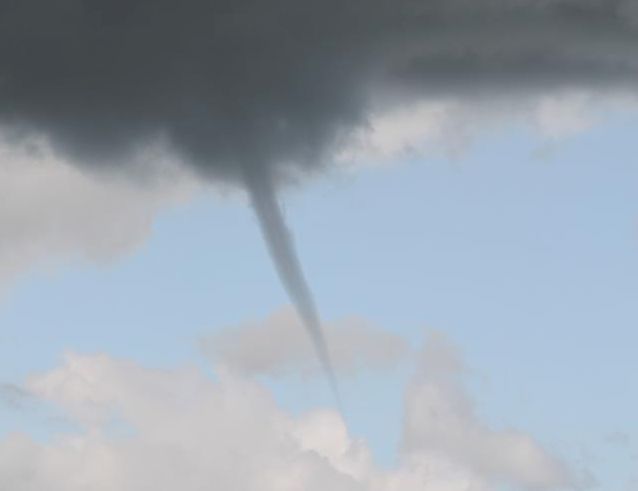 A funnel cloud spotted last Monday just east of Hamilton appears to have touched the ground, according to one WeatherWatch.co.nz reader who saw it unfold while driving nearby with her children.

A funnel cloud doesn’t become a tornado until it reaches the ground but needs to still have winds above about 100km/h.

Click here to see 4 new photos of the small twister

WeatherWatch.co.nz reader Mere Bianchin said the funnel touched down in a corn field, and although it was small, she says soil was clearly seen being sucked up.

“I had two of my kids in the car as we headed away from Hamilton towards Eureka. As we came down Ruakura Road past the university, I saw the funnel cloud over head…the line of the tornado was pale, white against the dark clouds and I couldn’t tell if had touched the ground at that point”.

Her son Michael was in the front seat, and said “Look!” as they passed the tornado on the left.   “It looked about 1 or 2 metres across at the bottom, thank god it wasn’t bigger” said Mere Bianchin.   “[The tornado] was flinging soil up into the air about a metre. It was in a corn field with young plants, but I was surprised that the plants weren’t pulled up, only the loose soil was being sucked up and flung around. It looked like a fountain, with brown at the bottom meter or so and white swirls further up”.

WeatherWatch.co.nz says the possible tornado was at the very bottom end of the scale called an EF0 tornado, if it was even that.

Head weather analyst Philip Duncan says it’s borderline as to whether it was even technically a tornado.

“It’s at the bottom of the EFO tornado rating and may have even failed to reach that criteria.  EF0 tornados can suck roofing tiles off a house and the fact it sucked dirt a metre or two into the sky shows it had some strength but it’s unclear if it was strong enough to even be classified as a tornado or simply an impressive dust devil”.

“But technical points aside, clearly it’s what most of us would consider to be a tornado and shows the volatility of afternoon thunderstorms in summer through inland regions such as Waikato”.

If the photos now provided are of the same ‘tornado’ that was reported in the article above, then it is pretty obvious that there is some sort of small rotating updraft in the clouds, that has then descended down and briefly touched the ground.

If it was a dust devil, then it would have been something like what has been filmed in the following youtube clips – which clearly show no accompanying clouds in the sky.

I can also recall personally experincing a snow devil at Mt Hutt, many many years ago.

Whilst I understand how dust devils can be formed due to daytime heating in warm climates, I’m not certain how daytime heating can contribute to ‘snow devils’ – I would have guessed that local geography would have contributed more towards their formation. Perhaps someone else can elaborate here.

It seems this was a landbased tornado and not a meso-cyclonic tornado. Land based tornadoes are weak to very weak and do little in damage.
No rotation was indicated by radar from what I could see.
These tornadoes are just a result of daytime surface heating, and have nothing to do with a rotating updraft.