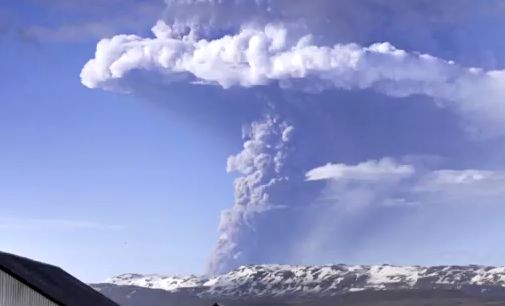 A volcanic eruption in Iceland forced flight cancellations and the closure of airspace over the country’s four international airports, an official said Sunday.

“There are no international flights in or out of Iceland at this time,” Keflavik International Airport spokeswoman Hjordis Gudmunsdottir said.

Officials were expected to reassess the situation (late Monday NZT), she added.

There was “no impact on European or transatlantic flights” after the Grimsvotn volcano’s eruption, and none was expected on Sunday, Europe’s umbrella air traffic control association Eurocontrol said.

Ash is expected to reach Scotland on Tuesday and could enter France and Spain on Thursday, Eurocontrol said.

Weather patterns this weekend have been very different from the northerly winds that swept through the region after last year’s eruption, a spokeswoman for the official United Kingdom weather agency said. But she said the ash cloud’s movement is difficult to predict.

Ash could reach the United Kingdom and northern continental Europe Wednesday, she said.

The Grimsvotn volcano under the Vatnajokull glacier erupted Saturday, according to the Icelandic Meteorological Office.

A dark cloud of smoke rose from the glacier, and scientists flew over the scene to evaluate the event, according to CNN affiliate TV2 Iceland. The last eruption of the volcano was in 2004, TV2 Iceland reported.

“It is important for people to know that not all of Iceland is covered in ash,” Gudmunsdottir said.

Sitrun Kapitola, manager of the Islandia Hotel Nupar, which is close to Saturday’s eruption, said she could see a cloud of smoke over the mountains, and ash was falling around the hotel.

Police were telling her and others that there was no need to evacuate and there was nothing to fear, Kapitola said. “We see it very well,” she said.

Tourists at the hotel were excited to see the eruption, watching the events unfold while eating dinner, she said.

“It happens every 10 years,” she said. “It mostly produces water.”

Grimsvotn is Iceland’s most frequently active volcano. In 1783, a 16.7-mile fissure system from the volcano produced the world’s largest known historical lava flow over a seven-month period, damaging crops and livestock, according to the Smithsonian National Museum of Natural History. A resulting famine resulted in the loss of one-fifth of Iceland’s population, according to the Smithsonian website.

“It’s nothing compared to the other one,” she added, referring to last year’s dramatic eruption of the Eyjafjallajokull.