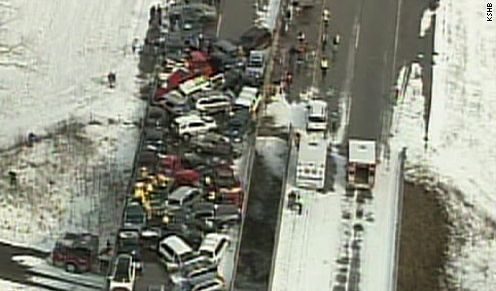 After experiencing a rare snowfall Friday, much of the South on Sunday was bracing for a second round of winter weather as forecasters warned a second storm would bring more snow.

The National Weather Service issued winter weather advisories and warnings for a handful of Southern states, stretching into Indiana and Illinois. Winter storm watches issued for areas in Ohio and West Virginia. Snow was also expected Sunday night into Monday morning in Tennessee and across the mid-South.

“A winter weather advisory for snow means that periods of snow will cause primarily travel difficulties,” the weather service said. “Be prepared for snow-covered roads and limited visibilities.”

In advance of the storm, Delta Air Lines said Sunday that it was canceling 400 flights from the early morning through noon Monday, the majority in the Carolinas, Tennessee and Georgia. AirTran Airways canceled 48 flights scheduled to depart or arrive in Atlanta between 8 a.m. and 10 a.m. on Monday, and more cancellations are possible, an AirTran spokesman said.

A snow emergency will go into effect 9 a.m. Monday in Washington, Mayor Adrian Fenty said. The area has already shoveled itself out of a season record snowfall according to preliminary National Weather Service estimates.

Slick conditions in Kansas on Sunday caused at least two massive pileups, one of which involved as many as 30 vehicles. Video showed cars, vans and trucks sandwiched on a small bridge, with emergency workers climbing over vehicles to reach the injured. The extent of injuries was not immediately known. Portions of interstates 70 and 35 were expected to be closed for “several hours,” according to the Kansas Department of Transportation.

“It happened too fast,” said motorist Sam Skramstad, who was driving home to Colorado. “It was just there and I headed for the guardrail and it didn’t move. And then I just kept getting nailed from behind.”

He said his wife went to the hospital with chest pains after the crash.

According to the National Weather Service, 68.1 percent of the United States is covered with snow, compared with 51.2 percent in January. Every state except Hawaii has some snow cover.