VIDEO – Tornado up close and personal 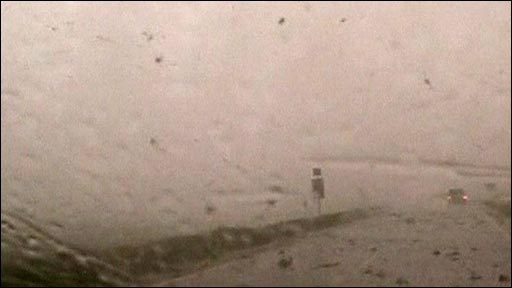 This really is worth a watch as camera crew go inside a huge tornado.
A violent twister ripped through Smith County, Kansas earlier this week.
Storm chasers Brandon Ivey, Sean Casey and Herb Stein were on the ground to intercept the tornado and capture footage.
The crew shot the footage from within a specially-designed tornado interception vehicle called a TIV2, which was built to withstand extreme winds.
The vehicle has several unique safety features, such as the use of unbreakable, polycarbonate glass and hydraulic spikes which anchor the vehicle into the ground.
According to the crew, wind speeds were recorded up to 280kph before the tornado ripped the instruments from the vehicle. If confirmed, this would give the tornado an EF-4 rating.

Sean used the TIV to shoot his IMAX movie Tornado Alley (sadly not yet available to view in New Zealand) and was featured on the Discovery Channel show Storm Chasers. He tweeted of this intercept “Hit with lots of debris, door opened. Piece of wood entered vehicle.” Yikes.