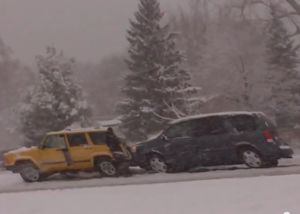 Snow is falling hard and fast on the Minneapolis/St. Paul metropolitan area of Minnesota, (colloquially known as the “Twin Cities”).

The powerful winter storm has brought blizzard conditions to parts of the American Upper Midwest and Northern Plains.  The heavy snow and strong winds have made travelling difficult, if not dangerous.  As a result, many flights have been cancelled and travelling on the roads is not recommended.

Just a quick definition here; A “blizzard” in the US is not a storm that produces heavy snow.  It often does, but that’s not its defining characteristic.  It’s a storm that causes dangerously low visibilities by whipping snow around on strong winds.  So, you can have heavy snow without having a blizzard.  But you can’t have a blizzard without strong winds (64 km/h)

However, plenty of snow is expected for Minneapolis/St. Paul.  Up to 35cm of snow could accumulate before the storm is over.

Check out this video from the Twin Cities shot earlier today…

Minnesota law enforcement authorities say more than 300 car crashes were reported in the last 12 hours.  Fortunately, none of them fatal.

WeatherWatch.co.nz Forecaster Howard Joseph, who is from Minnesota, says after the storm is over, the area of low pressure that is driving the snow will tap into cold Canadian air and draw it south over Minnesota.

Mr Joseph says “That will send temperatures plummeting.  Highs this afternoon are around freezing.  Lows tonight will fall to around -15 C and highs tomorrow probably won’t get above -12 C”