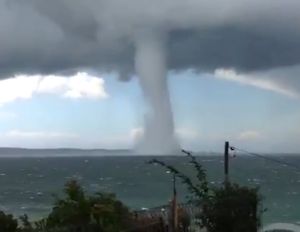 A weekend of severe weather over eastern Australia was capped by an amazing waterspout forming over Batemans Bay in New South Wales yesterday.

Residents described it as a “giant twister”.  One resident said it got really cold just before they noticed the waterspout.

Reports say it formed around 2pm local time yesterday and lasted about 15 minutes.

No reports of damage were associated with the waterspout.