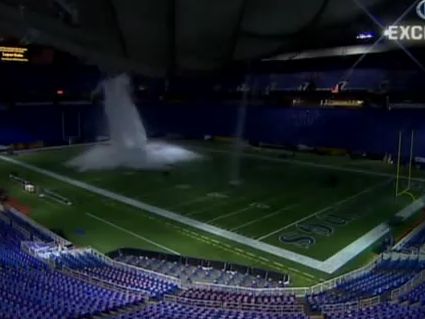 A powerful snowstorm barrelled east through the Midwest on Sunday, bringing with it more precipitation and gusty winds and leaving behind a trail of significant damage, large snow drifts and subarctic temperatures, according to the National Weather Service.

Winter storm warnings and advisories Sunday extended as far west as Illinois, as far east as Pennsylvania, and as far south as northern Alabama and Georgia.

And today the inflatable roof at the world famous Metrodome in Minnesota collapsed under the weight of the snow.  View the video below.

Meanwhile, residents of the upper Midwest who braved at-times blizzard conditions on Saturday faced the prospect Sunday night of wind chills dipping, in spots, as low as -34C degrees below zero. This comes after up to 60cms of snow fell in parts of Minnesota and as many as 50cms in Wisconsin since Friday.

After prompting the closure of highways in Iowa, South Dakota, Minnesota and elsewhere a day earlier, the storm caused havoc with air travel Sunday.

About 1,375 flights in and out of Chicago’s O’Hare airport had been cancelled as of 4:45 p.m. (5:45 p.m. ET), with delays for travelers heading to and from the Windy City averaging around 45 minutes, the Chicago Department of Aviation said in a statement. Another 300 flights were cancelled at nearby Midway airport.

The pounding snow caused the roof of the 64,000-seat Metrodome in Minneapolis to “deflate” Sunday morning, Minnesota State Patrol spokesman Lt. Eric Roeske said. Workers wielding shovels could be seen clearing the roof of the heavy white stuff, while photos from inside the darkened stadium showed much of the field covered with snow that fell from a gaping hole in the dome.

Roy Terwilliger, chairman of the Minneapolis Metro Sports Commission — the group that oversees the Metrodome — said the heavy snow and cold, high winds “was too much pressure on the dome and several panels on the Teflon roof were caused to rip.”

Sunday’s game between the hometown Minneapolis Vikings and New York Giants has been pushed to Monday at 7:20 p.m. ET and moved 540 miles southeast to Ford Field in Detroit, Michigan, the NFL said in a statement Sunday. All those with tickets to the originally scheduled game would get preferred seating near the 50-yard line and free tickets would be distributed, the league said.

Even with the snow and winds subsiding, road travel remained perilous in much of Minnesota. St. Paul, for one, declared a second snow emergency through early Monday to expedite plowing of city streets.

In Wisconsin, Gov. Jim Doyle declared a state of emergency for 72 counties to facilitate the movement of emergency resources and personnel who were activated Saturday, he said in a statement. We Energies reported 10,000 power outages across the state Sunday, said Barry McNulty, a spokesman for the company.

“It’s so windy that when they plow the roads, the snow just goes right back on,” said Evan Bath of La Crosse, Wisconsin, a CNN iReporter who said he’d cleared his driveway five times. “I-90, you can’t even drive on it.”

In Iowa, snow had subsided in some areas but emergency workers were coping with more than 1,000 power outages, a state emergency spokesman said.

Greyhound bus service along the Omaha-Des Moines route was expected to resume later Sunday. Some bus travelers at the Des Moines bus station had been stuck there since Saturday night. Greyhound spokeswoman Maureen Richmond said pizza was brought in for those passengers due to the inconvenience.

Patti Thompson, a spokeswoman for the emergency services in Illinois, said Sunday that northern counties were getting the worst of the weather Sunday afternoon and that Department of Transportation teams were working to clear roads. No power outages have been reported, she said.

While many states saw snow Sunday, the expected accumulation of a few inches in most locales paled compared to what hit Wisconsin and Minnesota and Wisconsin, according to National Weather Service forecasters.

The reach of the storm system continues to expand. Hard freeze warnings, for instance, extended as far south as Florida, with the weather service forecasting 13-degree wind chills on Monday night in Tallahassee.

Still, not everyone in the United States was shivering. Parts of southern California were experiencing record-warm temperatures with high temperatures Sunday above 27 degrees Celsius.