Video: Snow, rain, and gales – a very busy week ahead for parts of NZ 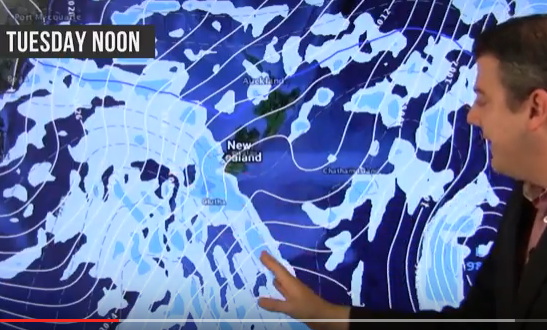 There are a lot of misleading headlines and clickbait news stories about the incoming snow, rain and gales – so we take an indepth look at who is most at risk from severe weather, when it happens and when it clears up.

This is not the biggest storm of the year, but it is likely going to be the coldest blast of air for 2017 across New Zealand with snow heavy enough to affect travel plans in both islands and a low pressure system in the North Island adding rain and gales into the mix, too.

A large low over the North Island later this week will squash up against high pressure further south west. This will make for a â€˜squash zoneâ€™ of gale to possibly severe gale winds through central areas mid to late week, and at the same time, heavy rain falls in the east.

There is a lot to cover and todayâ€™s video is mostly focused on the snow and wind aspect. On Tuesday, weâ€™ll take a closer look at snow, gales, and rain and timings in more detail.

Today is an overview of the week ahead and what each day generally has in store for you.