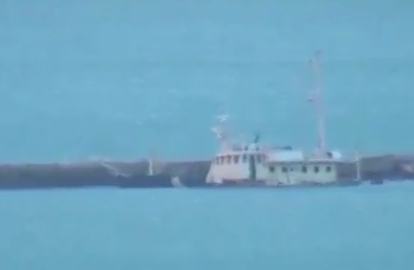 Updated 12:14am NZT — The eye of very powerful Hurricane Gonzalo is now well away from the small low lying island nation of Bermuda – and live streaming video has captured the damage. Winds over 210km/h hit the island Saturday afternoon NZT.

It appears most properties that can be viewed by the webcam (while it was panning around just after midnight) have been damaged by the storm and a number of boats sunk – including some moderately large vessels.

Bermuda lies east of the USA in the Atlantic Sea and is home to 64,000 people, it’s very low lying and extremely exposed to hurricanes but it’s been over a decade since a storm this big and powerful has made a direct hit.

Earlier, as winds eased as the eye crossed over the nation, WeatherWatch.co.nz received this quote from a local on the island “In the calm the tree frogs started singing. So normal it’s, well, just weird”.

WeatherWatch.co.nz says this morning Bermuda time winds should be down from hurricane force to gale and more widespread damage reports should come in Sunday morning NZT.

Damage is likely to be significant across the country.

The webcam below pans around a large area and zooms in and out from time to time.  We cannot control the view or angle or when it moves. Thanks to PTZtv for the link!

The video captures the final 4 hours of live streaming webcam from Bermuda – move the slider along until daylight, the camera then pans around and zooms in on damage.

Screenshots captured from the webcam around 12:10am Sunday NZT by WeatherWatch.co.nz