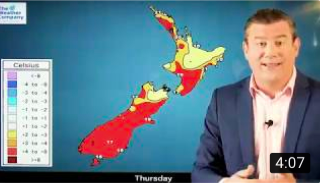 Warmer than average weather is spreading into all regions of New Zealand for Thursday, Friday and Saturday – but a nationwide low is moving in for Motherâ€™s Day followed by a cool down.

The colder southerly arrives on Sunday night after a day of rain or showers in most places. Monday dries up with winds easing by evening but Monday will be much cooler nationwide, especially southern NZ.

Next week looks dominated by high pressure again but another cold front is likely around Wednesday, mainly for the South Island.

I am looking for changes I see the me service has warnings for the same old places….the dry spell is well and truly dusted when the patten changes