VIDEO: More heavy La Nina rain for eastern Aussie as NZ lies on the edge of it all 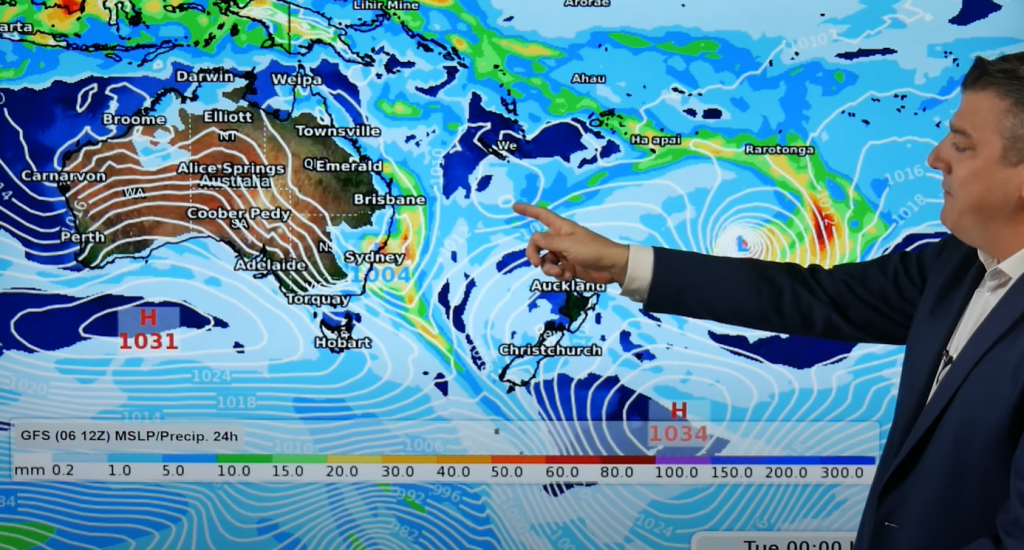 New Zealand has some temperature ups and downs this week but northern NZ remains summer-like with highs in the mid to late 20s and lows in the late teens. The South Island and lower North Island has a bit more up and down with those temperatures but most places in NZ are dry this week and fairly settled as high pressure crosses over and exits out to our east.

Meanwhile the eastern side of Aussie (NSW and QLD) are in for even more heavy rain this week and next week to – with the low impacting Sydney drifting to NZ’s South Island late this week bringing a burst of West Coast rain and possible gales through the mountains.

Any idea when we’ll get some rain in Coatesville? My paddocks are dust bowls 🙂

Hi there, sorry at this stage it’s still leaning drier than average for another week or two. There may be some better chances for rain late month. We’ll be updating NZ’s 2 week rainfall chances later this week. Fingers crossed for you!
– WW

Thank you Phil top job as usual and I would like to say a big thank you to the team you have at weather watch for the help you’s do a fantastic job thank you and keep up the great work…….Paul from dbay Australia

Hi Paul,
Thanks very much for the kind message, it means a lot to us! Hope all is well in Aussie and not too wet where you are.
Cheers
Phil D

What are your views on weather control methods?
i saw a jet do a series of maneuvers over the hauraki gulf today over blue sky’s. It left behind an obvious tail that soon developed into a scattered cloud formation?? Chem trails perhaps?
I have never seen this in NZ but have witnessed this online.

Hi Tony, thanks for the question. The jet you saw was like the NZ Airforce one which has been out today flying in the upper North Island skies (doing loops around Auckland city too). In NZ chem trails wouldn’t work as NZ is too narrow and windy for it to have any impact – any clouds that high drift out to sea. When it comes to chem trails, despite a handful of people believing they exist here, no one has ever provided any evidence of planes being loaded with chemicals or the organisations that would do this without being seen. The only photos we receive are of normal vapour trails that jets make when the hot engines interact with the much colder air aloft/above. This forms small clouds and in North America and Europe where many more jets fly over these contrails can actually lower the air temperature by 2 or 3C. In NZ we don’t get enough of them to really make any impact. While jet engines do produce pollution, the clouds they form in their trails is just that – a normal cloud.
Cheers
Phil D