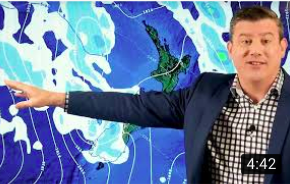 Sub-tropical winds are developing across New Zealand and tonight will be milder nationwide compared to the past two nights and mornings.

We have some rain and showers around the next few days, mainly on the West Coast and then northern NZ.

Totals generally arenâ€™t too big. Friday is warmer than average nationwide but a cool down is coming thanks to this enormous Aussie high – next week gets colder still.

The high itself may not even reach NZ for another 9 or 10 days.

for petes sake man not another one will they ever end

cant you read or listen to the video,is rain,its not till the weekend next.