VIDEO: Hotter weather coming for NZ, storms nearby but missing us 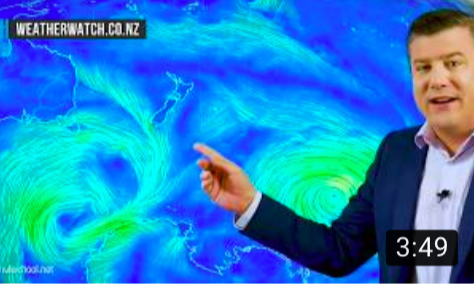 We have a few showers in the forecast over the next few days, mainly focused on the West Coast. Elsewhere itâ€™s mostly dry with hotter weather moving in thanks to both sub-tropical norâ€™westers and winds out of Australia.

Ex-Cyclone Tino is impressive in the Southern Ocean and heading to southern Chile. Itâ€™s not affecting NZ now but itâ€™s impressive to look at.

We have another Southern Ocean storm next week – again it missed NZ but itâ€™s likely to help enhance those windier westerlies again.

*A reminder, due to Auckland Anniversary on Monday our next weather video will be on Tuesday.