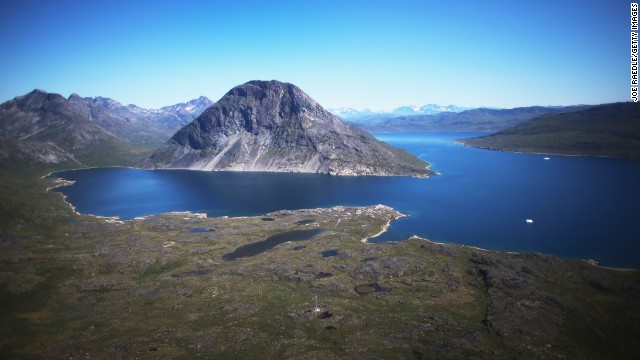 British and American scientists watching Greenland’s massive ice sheet have found what appears to be a 460-mile “megacanyon” far beneath the frozen surface of the world’s largest island.

Airborne radar images taken by the U.S. space agency NASA and compiled by scientists at the University of Bristol revealed the canyon’s existence, Bristol glaciologist Jonathan Bamber said Thursday. It’s buried under the layer of ice that blankets Greenland, a covering up to 3 kilometers (1.9 miles) thick.

The gouge is about 50% longer than Arizona’s 277-mile Grand Canyon, but not as deep — ranging from 650 feet to about 2,600 feet (200 to 800 meters), Bamber said. It runs from the middle of Greenland to its northern shore, on the Arctic Ocean, and it’s likely to have been covered over by ice for 4 million years.

“It’s a continuous canyon. It’s pretty deep. It very much looks like it predates the ice sheets,” Bamber said. “We think it’s indicative of a river system that was here before the ice sheet was there, and which perhaps was modified by the ice sheet cover some, but not much.”

The discovery is a byproduct of the intense scientific focus on Greenland amid concerns about rising global temperatures. The radar images were shot by NASA’s Operation IceBridge, which flies aircraft over the island because the ice sheet is too thick for satellite-based radar to penetrate, said Michael Studinger, the project’s lead scientist.

Bamber and colleagues from Bristol, the University of Calgary in Canada and Urbino University in Italy published their findings Thursday in the journal Science. They were trying to compile an updated set of ice-sheet records when they noticed “this long linear feature that seemed to be pretty continuous,” Bamber said.

“It looks like it was a pretty extensive river system millions of years ago,” he said.

The find isn’t a “first-order concern” for scientists studying climate change but will help researchers understand how the ice ebbs and flows across the face of Greenland and other polar environments, Bamber said.

The main reason Greenland is under study is to record the height of the ice above it, not to map the land beneath, Studinger said. The existence of the canyon is “basically a tiny piece in the big puzzle of what’s going on in Greenland,” but still an exciting find, he said.

“We live in the 21st century, and we are still discovering 750-kilometer features under the Greenland ice sheet that we didn’t know about,” he said.