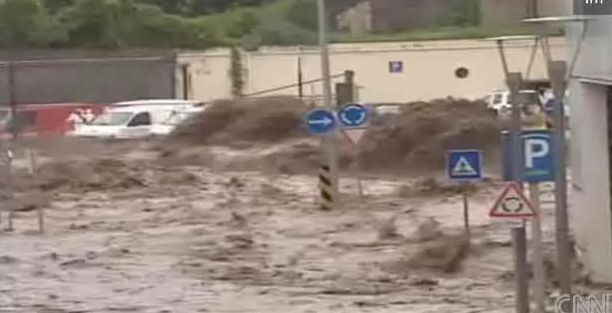 Portugal declared three days of national mourning Monday amid fears the death toll from devastating floods and mudslides on the island of Madeira could rise above 42.

Search teams have been working to find more victims after floodwaters caused by heavy rains swamped the capital Funchal, unleashing a torrent of mud that swept away homes, roads and trees. At least 120 people were injured.

Rescuers were trying to drain a two-story undergound car park at a shopping center where many people are thought to have become trapped.

Rescuers feared were that when rains started on Saturday many people may have rushed to retrieve their cars, but ended up trapped in the car park, CNN’s Portuguese affiliate, RTP state TV, reported.

Flags were flying at half staff on government buildings in Lisbon in respect of the victims. European Commission President Jose Manuel Durao Barroso was due there later Monday to give a news conference describing what assistance the European Union can offer to Portugal.

Madeira-born footballer Cristiano Ronaldo also paid tribute to the victims as his team Real Madrid played Villarreal on Sunday. He lifted his jersey after scoring a goal to reveal a white T-shirt with “Madeira” written on it.

Ronaldo wrote on his blog later that he was “incredulous, shocked and dismayed” by the disaster, and offered his assistance.

The mayor of Funchal, Miguel Alburquerque, has warned it was “very probable” the toll will rise.

“Our main concern is for the damaged and flooded homes, the cars buried and swept away by water, where we fear we will find new bodies,” he told the Jornal de Madeira newspaper, according to Agence France-Presse.

Rescuers were still hunting for other people believed missing in the deluge as efforts to clear up got under way.

Authorities said about 250 people had been evacuated to military bases and other safe locations.

Pedro Barbosa of the Civil Protection Agency told CNN all the damage occurred in just a few hours Saturday morning due to “very concentrated, very intense” rains that sparked flooding and mudslides.

The mudslides and flooding damaged roads and homes in Funchal, and in Ribeira Brava, which are both on the southern portion of the Atlantic island.

Madeira, an autonomous region of Portugal, is a popular resort destination. There have been no reports of any dead or missing tourists.

Barbosa said Saturday’s heavy rains were the worst in Madeira since 1993, when a storm killed eight people.

Madeira is one of the Madeira Islands, an archipelago about 600 miles (1,000 kilometers) southwest of the Portuguese mainland.