Video: First ever video (HD) of a craft landing on Mars (Curiosity) 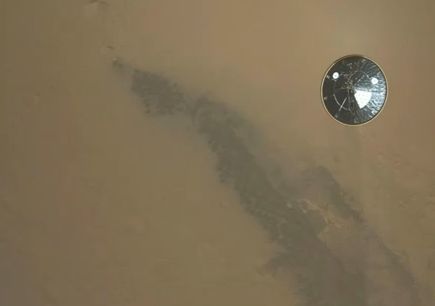 The descent of the robot explorer Curiosity onto the surface of Mars has been captured in new high definition detail.

A video posted on Youtube enhances grainy NASA footage of the Curiosity landing by piecing together thousands of pictures from the rover’s Mars Descent Imager (MARDI).

It begins with a heat shield falling away from Curiosity as it plummets through the pink skies above Mars.

The pockmarked surface of the planet can be seen in increasing detail throughout the descent.

In its final seconds, the video shows Curiosity lowering slowly to the ground as dust swirls around.

Curiosity’s descent was a triumph of engineering, packing a series of complex and difficult manoeuvres into what NASA engineers described as “seven minutes of terror”.

Video of a Mars landing has never before been shown.

The Mariner 4 was the first spacecraft to travel to Mars in 1965. It returned a total of 634 kb of data, including 22 photos.