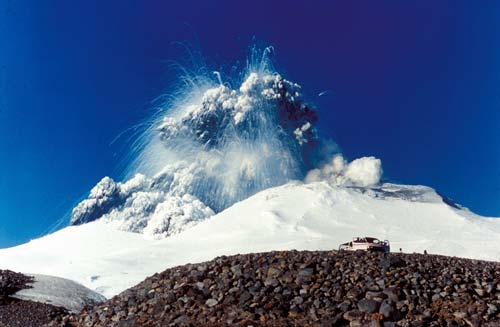 We take you back to the 1990’s when Mt Ruapehu, after weeks of rumbling, finally erupted.

* The eruption produced at least seven million tonnes of ash, with 2.3 million tonnes falling on Lake Taupo.
* Drinking water contamination affected people and animals, particularly in rural areas.
* Ash got into waterways, reducing water clarity in some streams and increasing acidity in others.
* Metal structures and vehicles were damaged by ash.
* Tourism activities were disrupted, causing a downturn in the area’s economy.
* Dangerous levels of sulphur dioxide (SO2) were found on the mountain.
* Ash in Tongariro River resulted in damage to the Rangipo Power Station.
* Ashfall lowered visibility, disrupting air travel at times, as the plume (which could be seen by satellite) travelled north east to the coast and across the Bay of Plenty.

Geoff Mackley sent footage to TV3 and gave us an insight of how impressive the eruption was.