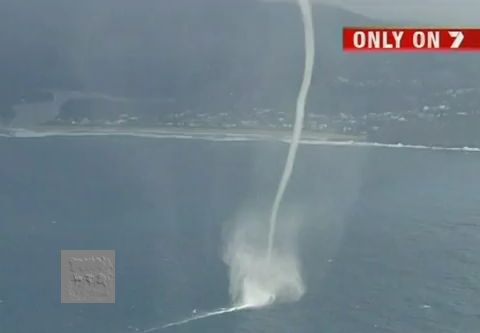 Dramatic footage filmed from a helicopter by Australia’s Channel 7 yesterday showing a series of powerful waterspouts near the coastal suburb of Terrigal, on Australia’s New South Wales coast.

Several powerful columns of swirling air could be seen blasting along the water’s surface near the coastline.

Channel 7 claimed the spouts reached heights of up to 600 metres (nearly two thousand feet), but dissipated as they neared land. The natural wonders came as strong winds and heavy rain also lashed other parts of the state, causing flash flooding and traffic chaos in Sydney.

There is evidence to suggest weather modification technology is being used to create extremes. It would not surprise me if technology was used to create tornadoes, like this waterspout ‘tornado.’ It may be that there is a plan to tell us that as there are a lot more extremes, man-made global warming must be real, so you must all pay ‘carbon taxes.’

And feel free to send the link to friends and family.

Great footage, like the very last shots of the rocks.