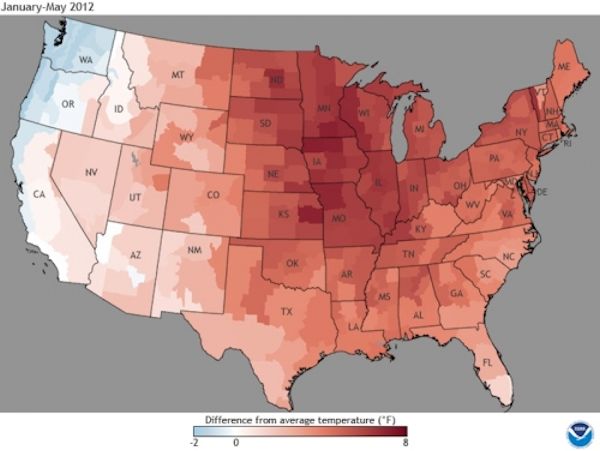 The hottest year on record.

While a record hot year is not unavoidable, it seem pretty likely.

After the fourth-warmest winter on record in the 48 contiguous United States, the spring of 2012 was by far the warmest in 118 years of recordkeeping.  And, the US just finished the 3rd hottest summer on record.

The result; 33 out of the 50 states are experiencing their warmest year-to-date on record, and the nation as a whole has been warmer than any other January-August period.

The Weather Channel’s Eric Fisher says that the entire country would have to average a temperature of 8.76 C (47.76 F) over the rest of this year to keep from breaking the record for all-time hottest year.

Even for the period September through December, that’s pretty chilly for the US.  It’s pretty unlikely that will happen, but it has happened before.  15 times, as a matter of fact, with the most recent being in the year 2000.

But the likelihood of that happening this year is pretty small.  The cold blast that set up across the lower 48 at the end of 2000 was a record breaker in its own right, setting a record for all time coldest temps.

So, unless something really unusual happens, 2012 will go down as the hottest year on record in the United States.

By WeatherWatch.co.nz Analyst Howard Joseph with contributing information from The Weather Channel