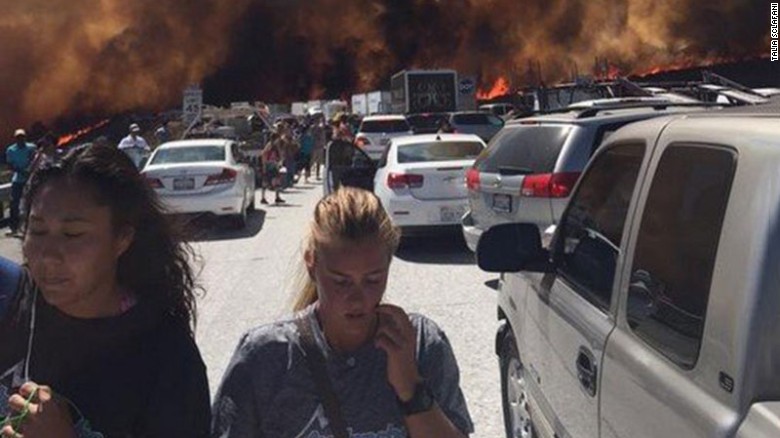 A wildfire driven by desert gales scorched 3,500 acres of Southern California drought land in just four hours on Friday. And Neha Shresha sat in her family’s car, watching it race right at them.

A long, orange wall of flame with black smoke billowing high above it was about to sweep over Interstate 15 in San Bernardino County, where their car was trapped in gridlock near Cajon Pass.

There was no driving anywhere, not even off the road.

“So, we ran off. We only got our purses and stuff,” Shresha said later. She and the other three gazed into the gray, burned-out steel hull that was all that remained of their car — aside from ashes blowing in the wind.

The cars in front of and behind theirs for dozens of yards, and four lanes thick, looked the same way. In the end, at least 20 cars burned completely and 10 partially, said the state firefighting authority CALFIRE.

After the flames moved on, motorists streamed back to check on their cars, SUVs and trucks. Most walked away again, abandoning their scorched wrecks where they stood on I-15.

Before dawn Saturday, parts of the highway in the area had been reopened.

#NorthFire (Update) Firefighting aircraft has been grounded due to drone activity in the area pic.twitter.com/aVkx5Ud2JU

There have been no injuries in the fire, according to CALFIRE. Near a separate, smaller fire in the same mountains, sheriff’s deputies evacuated 90 girl scouts from a campground.

Persistent drought has provided acres of dried out brush as fuel, and 20 mph winds drove the fire quickly over a broad area. With ideal conditions for blazes, firefighters can expect to be busier than average during wildfire season this summer, according to the National Interagency Fire Center.

On I-15, Talia Sclafani sat in a van with her soccer teammates, when police came by calling over loudspeakers for people to stay in their cars. But the team and their driver ditched the van anyway and ran up a hill in 95 degree heat.

They stayed up there for about three hours. “There were lots of people crying. Some were vomiting. People were really frightened,” she said.

Down below, a chopper dumped water onto cars and a burning tractor-trailer, as firefighters also fought to save vehicles on the interstate.

For a while, officials were concerned about private drones in the same airspace with the choppers.

“Please stop flying hobby drones in the area. We can’t risk the choppers colliding with them. We could have loss of life,” U.S. Forest Service spokeswoman Gerrelaine Alcordo said.