USA: Snowstorm slams Eastern US, killing 8 and knocking out power 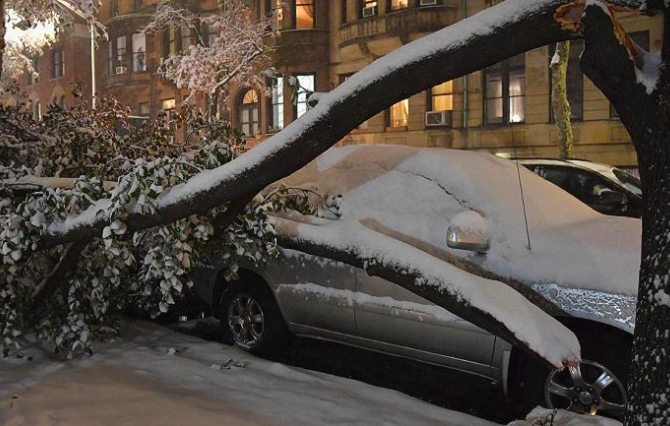 A strong wintry storm still was dumping snow Friday in far northern New England after creating traffic havoc that claimed at least eight lives across the country’s eastern half and knocked out power for tens of thousands of people.

A mix of rain, snow and ice that initially hit the Midwest caused headaches from the South to the Northeast, leaving up to a foot of snow in some parts of the latter and widespread freezing rain and ice accumulations elsewhere.
Conditions prompted school closures, hours-long delays for commuters and hundreds of flight cancellations.
>>> Track the storm here

Pedestrians push through a wintry mix of snow and ice Thursday in New York.
More than 400,000 customers were without power Friday morning in 17 states from Kentucky to Maine, according to poweroutage.us, in part due to freezing rain.
The storm brought the Northeast its first significant snow and ice accumulations of the season and was lingering Friday afternoon in New Hampshire and Maine.

The wintry weather contributed to traffic crashes that killed people in several states, authorities said.
A 60-year-old woman died Thursday in Miami County, Indiana, after she lost control of her vehicle and crashed in slick road conditions, the state’s police said.
One person was also killed Thursday in Canton, Ohio, and another in Maryland, police said. In Mississippi, a tour bus crashed Wednesday, killing two people and wounding several others. The bus, carrying 46 people, was traveling from Huntsville, Alabama, to Tunica, Mississippi, Sgt. Joseph Miller of the Mississippi Highway Patrol said. The other occupants were taken to area hospitals with various injuries, Miller said. The cause of the crash was weather-related.
Arkansas Highway Patrol reported two separate incidents in which three people were killed after drivers lost control of cars on icy roads.
– View VIDEO and more news on this developing story via CNN.com here