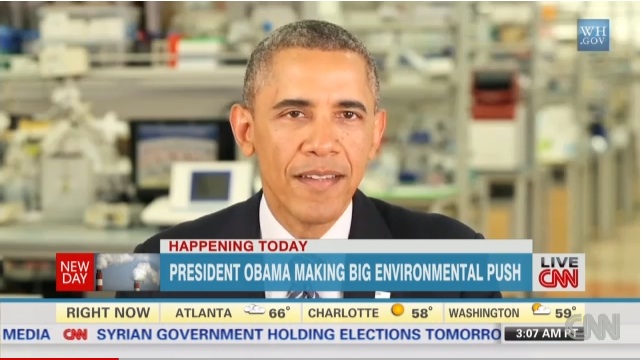 “Nationwide, by 2030, this rule would achieve CO2 emission reductions from the power sector of approximately 30 percent from CO2 emission levels in 2005,” the proposed regulation says. “This goal is achievable because innovations in the production, distribution and use of electricity are already making the power sector more efficient and sustainable while maintaining an affordable, reliable and diverse energy mix.”

The EPA says the regulation will also “reduce pollutants that contribute to the soot and smog that make people sick by over 25 percent.” The agency projects the reductions will avoid 2,700 to 6,600 premature deaths and 140,000 to 150,000 asthma attacks in children.

States will have a variety of options to meet the goal, including improving energy efficiency both inside and outside plants, changing how long the plants operate each day, and increasing the amount of power derived in other ways through clean energy.

“As president, and as a parent, I refuse to condemn our children to a planet that’s beyond fixing,” Obama said in his weekly address Saturday.

“Being able to act to regulate the emissions of carbon will create profound benefits for the health of our children,” White House spokesman Jay Carney told CNN’s “New Day” on Monday.

Asked about criticism that the move won’t make much difference in global climate change efforts without India and China doing the same, Carney said, “The United States has to lead, first of all, and this is an indication that the United States will lead on this very important challenge posed by climate change and global warming.”

“We can lead this fight,” EPA Administrator Gina McCarthy said Monday at an event announcing the plan. “We can innovate our way to a better future. That’s what America does best.”

The regulation gives states a deadline of June 30, 2016, to submit their plans. Those states that need more time can submit an initial version by that date and explain the need for more time. A final version would then be due one or two years later, “as appropriate,” the proposed rule says.

By acting through a regulation rather than proposing a law, the president skirts Congress.

Some Republicans say the requirement will kill jobs in the coal industry. “The administration has set out to kill coal and its 800,000 jobs,” Sen. Mike Enzi said in the GOP weekly address Saturday. “If it succeeds in death by regulation, we’ll all be paying a lot more money for electricity — if we can get it.”

But McCarthy said the plan will ultimately make the average electricity bill in the United States 8% lower.

The U.S. Chamber of Commerce, a business federation, estimated the new regulations will cost the economy $50 billion a year.

The EPA offered a very different picture, saying the proposal will cost as much as $8.8 billion annually in 2030, but “will lead to climate and health benefits worth an estimated $55 billion to $93 billion per year in 2030.”

Rep. Steve Scalise, the Republican vice chairman of the House Subcommittee on Energy and Power, slammed the proposal. “Once again, this administration is trying to impose unachievable standards on our nation’s power plants that have no basis in reality. If allowed to go into effect, this rule will cost millions of Americans their jobs and cost the economy over $500 billion in lost economic activity.”

Carney wrote off job loss claims as a “doomsday scenario. That’s what they said when regulation was put in place in 1990 over acid rain. And it wasn’t true then.” The regulation, he argued, will create “huge benefits when it comes to enhancing our energy security and creating opportunities — entrepreneurial opportunities.”

“The bottom line is: We have never, nor will we ever have to choose between a healthy economy and a healthy environment.”

“This is something we can’t put off, and the President deserves huge credit for making this his legacy,” said David Doniger of the Natural Resources Defense Council.

Obama’s move could affect competitive Senate races in states with a significant coal industry, such as Kentucky, North Carolina and Colorado, where Democrats are trying to keep control of the upper chamber. Voters upset with Obama could swing their support to Republicans.

Americans on all sides of the issue will have a chance to comment before the regulations take effect.

“Every regulation is developed under slightly different circumstances,” but there is a general process that’s followed, the EPA explains on its website. “The proposal is listed in the Federal Register so that members of the public can consider it and send their comments to us. The proposed rule and supporting documents are also filed in EPA’s official docket on Regulations.gov.

The EPA will hold four public hearings on the proposal. They will take place in July in Atlanta, Denver, and Pittsburgh, and in July or early August in Washington, the EPA said.

“Generally, once we consider the comments received when the proposed regulation was issued, we revise the regulation accordingly and issue a final rule.”

It’s then codified in the Code of Federal Regulations.

Good on Obama and I hope the rest of the world follows his example. Here amongst a declining climate, I am seeing dirty fog, and a brown tinged horizon under the anticyclonic inversions. Cyclone Ita’s cloud way out in the Tasman Sea glowed well into the night, and it was so vivid that it was actually ghastly. Damn near needed sunglasses on by night. If a westerly arrives right on sunset or sunrise here, it is blood red and colours that are so intense that it just does not even look real. The Westerlies ex Oz have been dirty this year and the Northerly with them all sneezy and irritating. Still the deniers like Key and his offshoots continue to kid themselves. That’s because they’re not seeing or experiencing what we are. Nothing infuriates me more. The decline in 2014 has continued since we had the rapid escalation in 2013. It is horrible watching your climate going downhill, and knowing fully well that those who could help to stablilise it just do not give a damn. Come on NZ and Australia, you have to do something. Don’t ignore Climate Change until the cities follow our lead, or until there is a disastrous loss of life.