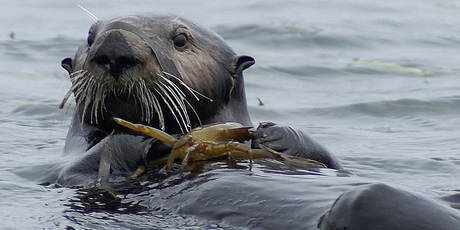 The return of sea otters in California’s Monterey Bay has caused a remarkable recovery of endangered sea grasses which provide food and shelter for a wide variety of marine wildlife, a study has found.

University of California researchers at Santa Cruz were surprised to see how recovering numbers of sea otters, a top of the food chain predator, caused the growth of vegetation at the very bottom of the food chain.

It’s one of several discoveries pointing to the importance of animals at the top of the ecological hierarchy to restore threatened habitats.

Sea grasses around the world, which provide habitats for a range of animals, are threatened by agricultural run-off which causes an explosion of algae, blocking out sunlight.

The revived California otter population kept down the numbers of crabs, which had been devouring the slugs and snails that in turn fed on the algae.