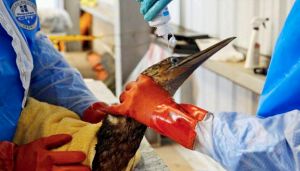 Gulf coast residents braced Saturday for the arrival of a massive oil slick creeping toward shore as nearly a million feet of boom were deployed in an effort to protect precious estuaries and wildlife — even as thousands of barrels of crude continued gushing into the water.

Landfall along the Mississippi River Delta and other Gulf areas was expected as early as Saturday.

But even as officials and residents wait for the oil to reach land, the slick has already taken a dramatic toll on life all along the Gulf Coast, bringing fishing and tourism to a halt in many places and threatening to cripple those industries for weeks to come.

“I’m extremely worried because I have customers that [have] already canceled trips,” Boola told CNN Saturday. “I should be out taking people fishing today and I’m not. I’m not making money today. Or tomorrow. I’m worried about the now factor, you know?”

“The oil that is leaking offshore, the oil that is coming onto our coast threatens more than just our wildlife, our fisheries, our coast,” Louisiana Gov. Bobby Jindal said at a Saturday press conference. “This oil literally threatens our way of life.”

The oil company BP — which operated the rig whose sinking caused the underwater oil gusher — partnered with government officials to hold town hall meetings throughout the region Saturday to respond to concern about the spill’s consequences.

But frustration was growing Saturday in Louisiana, Mississippi, Alabama and Florida. At a town hall meeting in Bayou La Batre, Alabama, Mayor Stan Wright warned fishermen in the audience that outbursts would be met with arrest. The fishermen were told that they were not allowed to ask questions.

Jindal suggested the response to the oil slick has so far been inadequate, saying “we continue to be concerned with BP’s ability to respond to this incident.”

Jindal said he has been working with local officials to develop cleanup contingency plans, but needs funding approval from BP and authorization from the U.S. Coast Guard’s incident commander to move forward.

“We need to empower our locals on the ground,” he said.

“Now they’re saying we are seeing sheens,” hitting the coast, Jindal said Saturday, citing the National Oceanic and Atmospheric Administration. “But they expect the heavier oil to be coming by tomorrow and Monday.”