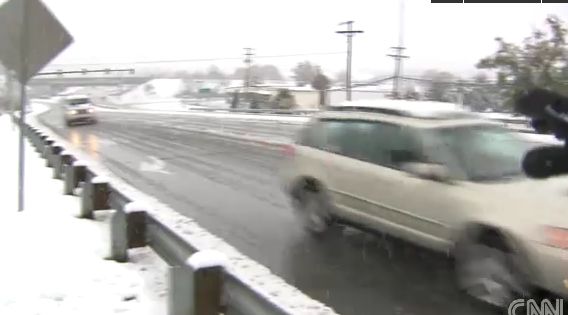 Airline passengers left stranded by a freak snowstorm that pounded the Northeast and Mid-Atlantic states were waiting to get to their destinations Monday NZT, many after spending a restless night on cots or airport floors.

“Whatever kind of system they had, it completely and utterly broke down,” said passenger Fatimah Dahandari, who spent a night in Hartford, Connecticut’s Bradley International Airport while trying to get to New York. “It looks like a refugee camp in here.”

More than 4 million people in at least five states were without power Sunday as the storm moved offshore. Up to five deaths, some in traffic accidents, were blamed on the storm.

Dhandari said her Boston-to-New York flight diverted to Connecticut after being told there was a problem on a runway at New York’s John F. Kennedy International Airport and the JetBlue plane did not have enough fuel to continue circling.

Early snow causes travel woes “We land in Connecticut and then it was one series of problems after another,” she said. Her flight spent nine hours “literally sitting on the runway” with no food and water, she said. Passengers were told the plane was waiting to refuel, then was waiting for a gate, then had to get behind another plane that had an emergency on board, she said.

By the time it was her plane’s turn, the plane was snowed in and could not move, she said, so there was another wait to get a truck to tow it to the gate. Once she got into the airport, Dahandari said everything was closed, providing passengers with no food options. They were told that the hotels were booked, she said, and if they left the airport they could not come back in.

She spent a night on the floor, and Sunday morning was standing in line with hundreds of others, hoping to receive a boarding pass and a spot on board a flight.

Cell service inside the airport was spotty, she said, and “everybody’s phones are dying. People are trading chargers and laptops.”

Overall, she said, passengers have been calm. “I keep waiting for somebody to freak out, but nobody is.” She said people were being courteous to airline employees, despite their irritation, as “they’re kind of stuck here too.”

The fashion consultant had hoped to attend two private Halloween parties in New York Saturday night that were important to her business, and planned to wear a $400 custom-made costume.

“We worked with the airport to secure services, including remote deplaning and (lavatory) servicing,” Lucia said. “Obviously, we would have preferred deplaning much sooner than we did, but our flights were six of the 23 reported diversions into Hartford, including international flights.”

In addition, Bradley Airport “experienced intermittent power outages, which made refueling and jetbridge deplaning difficult,” she said. “We apologize to the customers impacted by this confluence of events, as it remains JetBlue’s responsibility to not simply provide safe and secure travel, but a comfortable experience as well.”

Passengers will receive a refund on their flight, as well as a voucher for the same amount as their round-trip fare, Lucia said later Sunday.

The airline said on its web site that it was waiving change or cancel fees, along with fare differences, for travelers in a handful of airports — Hartford; Newark, New Jersey; Newburgh, New York; New York from JFK or LaGuardia airports; and Westchester County, New York.

Passenger Mara Dhaerman was also stranded in Hartford and said her JetBlue flight, initially from Fort Lauderdale, Florida, to Newark, New Jersey, spent nine hours on the tarmac in Connecticut. Passengers were told the plane was refueling, then de-icing, and that it was going to try to get back to Newark, but eventually a stairway was brought in and firefighters and troopers helped passengers deboard. She said she received a cot to sleep on about 1 a.m. Sunday.

CNN’s Richard Roth was among those stranded in Hartford. “It’s been a tough night for everyone,” he said Sunday.

JetBlue planned to fly three flights to JFK Sunday and one to Newark, he said passengers were told, along with at least one to LaGuardia.

Other forms of travel were also impacted. An Amtrak train with 48 passengers on board was stuck for nearly 13 hours when a rock slide resulting from the snow storm blocked the tracks near Palmer, Massachusetts, said Amtrak spokeswoman Vernae Graham.

The train, which originated in Chicago, was headed for Boston when it was forced to stop about 10 p.m. Saturday, she said. A bus was sent to pick up the passengers, but did not arrive until nearly 11 a.m. Sunday.

The buses took so long because of the weather and road conditions, she said. The train cars never lost heat or electricity, Graham said, and passengers were given complimentary food and beverages.

“It’s like a blizzard — you can’t see far at all,” Alban Ajro of Watertown, Connecticut, said Saturday night. “This is the first time that I can ever recall this kind of storm happening before Halloween.”

The early onslaught meant heaps of wet snow fell on trees still heavy with leaves — adding to the risk of falling branches and downed power lines.

At least three deaths on Saturday were linked to the unusual October snowstorm.

An 84-year-old man was napping on his recliner in Temple, Pennsylvania, on Saturday when a part of a large, snow-filled tree fell into his house and killed him, according to a state police report. With numerous downed trees in the area, rescue crews took two hours to safely remove the victim, police said.

Snow buried parts of New Jersey and New York on Saturday, including 15.5 inches in West Milford, New Jersey, and 12 inches in Harriman, New York. Cities in West Virginia, Pennsylvania and Maryland saw more than 9 inches of snow in less than one day.

But the storm did little to deter Occupy Wall Street protesters, who camped out in tents coated with a layer of snow in New York’s Zuccotti Park.

The governors of New York, New Jersey, Connecticut and Massachusetts issued emergency declarations for their states.

Connecticut Gov. Dannel Malloy said Sunday that some 40 shelters are open, in addition to places where people can go to warm up, take a shower or charge their phones.

“We are expecting record lows tonight … which means we’re going to have some freezing conditions in the morning,” he said.

Malloy added that authorities have left it up to municipal officials whether or not to postpone Halloween celebrations because of the storm.

Sunday evening, the state’s largest utility — Connecticut Light and Power — reported nearly 788,000 customers were still without electricity. A total of about 807,500 households were in the dark in Connecticut.

Elsewhere, about 1.9 million customers were without power Sunday in Pennsylvania; 639,000 in Massachusetts’ 584,000 in New Jersey; and 299,000 in New York, according to figures from power companies in those states. Thousands also lost power in Maryland, Virginia and West Virginia.

I believe alot of people in the New York area are referring to October as ‘Shocktober’, due to the very early snow storms.