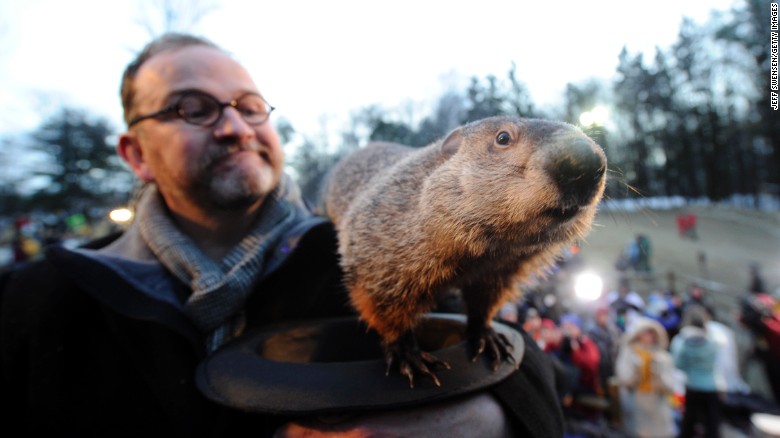 For more than a century, groundhogs have been midwinter luminaries, scampering into the spotlight on February 2 to divine whether the second half of the season will be cold or mild.

The stocky mammals are celebrated as soothsayers that peer into the future when they emerge from their burrows, surveying the landscape for telltale shadows that signal Jack Frost’s plans for the next six weeks.

Punxsutawney, Pennsylvania, is the birthplace of Groundhog Day and the home of Punxsutawney Phil, the Peyton Manning of prescient rodents. During a ceremony at sunrise, the waddling prophet is retrieved from his heated home inside a mock tree stump and hoisted heavenward by top-hatted helpers who interpret his gestures to make a prediction while thousands watch.

Phil’s stardom is coupled with infamy and not just due to the fact that his forecasts have been off 55% of the time over the past three decades, according to the National Oceanic and Atmospheric Administration.

Farmers, gardeners and ranchers fear groundhogs, also known as woodchucks and whistle pigs, because the animals chomp on crops and dig holes in fields that may damage plows or trip up livestock.

Groundhog Day was actually established by a hunting club. The members of the Punxsutawney Groundhog Club used to hunt their namesake creature during the late summer and host banquets where woodchuck was occasionally on the menu, according to Jeff Lundy, vice president of the club.

In 1909, local newspapers reported that the governor of Pennsylvania attended the group’s annual feast and 400 groundhogs were served to 400 guests. Lundy said the stories may have been exaggerated but acknowledged in the past, woodchuck was eaten as a delicacy in Punxsutawney.

Punxsutawney Phil isn’t very good at his job. One time, he got sued for it https://t.co/DziW772rIu pic.twitter.com/nXVV2bkijt

Is the groundhog friend or foe? And what’s the truth behind the legend of Punxsutawney Phil’s February walkabouts? We asked biologists, wildlife control specialists, hunters and animal advocates to weigh in on groundhog myths, misconceptions and controversies. As you shiver in anticipation of Phil’s forecast on Tuesday, read on to learn about the secret lives of groundhogs.

It’s a fallacy that Punxsutawney Phil awakens from hibernation on February 2 to assess the weather and determine whether to continue his winter nap.

The real groundhogs of Pennsylvania do indeed venture out of their dens in early February, but prognosticating the weather is the last thing on their marmot minds, according to a Penn State study.

They’re not looking for shadows. The animals are looking for love (and maybe some food). Moon-eyed males leave their bachelor pad burrows in pursuit of woodchuck Juliets, seeking out sweethearts in drainage ditches, roadside brambles and other hog hot spots. Before mating season begins in March, toothy lotharios embark on amorous quests to get acquainted with the females in their territory, said Penn State biology professor Stam Zervanos.

“The first thing they need to do is find mates,” said Zervanos, who co-wrote two journal articles about groundhog behavior. Using cameras and radio telemetry gear, he studied a group of 80 free-range groundhogs on the campus farm at Penn State Berks. “The timing is very important because they only have a short time to mate so the young can be successful. In order not to waste time, the males go out exploring while the females generally stay close to their burrows waiting for males to stop and say hello.”

Groundhog suitors linger around a female’s den for hours but there’s no hanky panky. It’s too early for them to mate in February, with a scarcity of food and an abundance of predators. Once they locate a receptive female, or two, they go back to their burrows and resume hibernating, planning to return in March for mating season.

“This is a very dangerous time for groundhogs because there’s a bunch of hungry foxes and coyotes around,” said Zervanos. “They can’t spend a lot of time out in the open. The sooner they find a female and duck for cover, the better.”

Climate impacts the date of first emergence; groundhogs in Maine court females later in the season than their counterparts in South Carolina. Once it’s time to mate, however, weather is a nonfactor.

“They’ll come out and mate no matter what,” said Zervanos. “We’ve seen them out with snow cover. If they don’t mate by early March, the young aren’t going to survive. The young have a limited time window to gain enough weight for the next winter hibernation.”