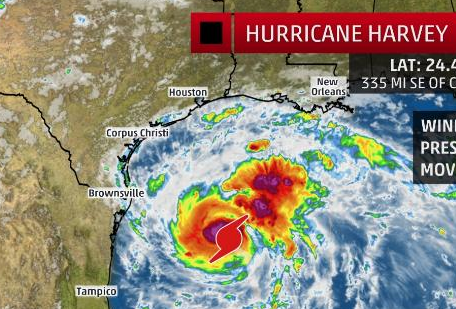 Harvey has rapidly intensified into the third hurricane of the 2017 Atlantic hurricane season and may become the nation’s first Category 3 landfall in almost 12 years, poised to hammer the Texas Gulf Coast with an extremely dangerous combination of torrential rainfall, storm-surge flooding and destructive winds this weekend, before taking a strange, meandering path next week.

Hurricane Harvey developed a roughly 30 to 40 km wide eye, as seen in microwave satellite imagery, prompting the upgrade to hurricane status by the National Hurricane Center around midday Friday.

The NHC says the center of Harvey is located just over 300 miles southeast of Corpus Christi, Texas, and is moving northwest at 16 km/h. Maximum sustained winds have now increased to 140km/h.

A hurricane warning has been issued for a portion of the Texas coast, from north of Port Mansfield to Matagorda, including the city of Corpus Christi. A hurricane warning means hurricane conditions are likely within the watch area. They are typically issued within 36 hours of the expected onset of hurricane-force winds.

Tropical storm warnings are in effect from north of Matagorda to High Island, Texas, including the cities of Houston and Galveston. This means tropical storm conditions are expected within 36 hours.

The NHC also issued its first-ever public storm surge warning, which includes a swath of the Texas coast from Port Mansfield to High Island. This means a life-threatening storm surge is expected in the warned area in the next 36 hours. This warning does not include Galveston Bay, but now includes Galveston Island and the Bolivar Peninsula.