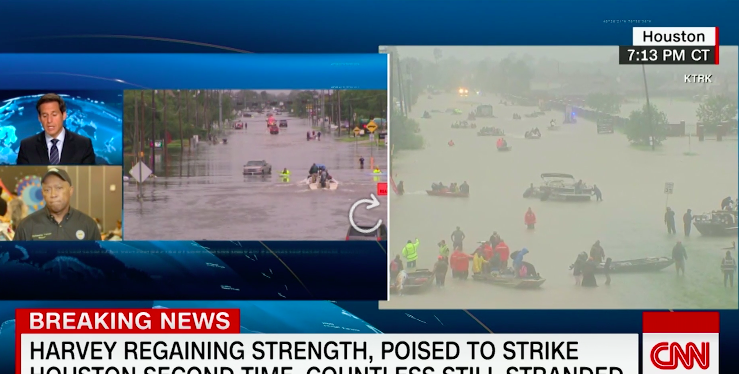 Daylight is fading in Texas as heavy rain continues to fall and flood waters in Houston continue to rise. People are still being rescued as flood waters rise and with darkness coming it will be another very long night for everyone.
The storm is now spreading into neighbouring state Louisiana where New Orleans may be dealing with complications 12 years exactly after Hurricane Katrina hit. The Gulf States will all be on alert for the next week or two.
As of 1pm New Zealand time here was the latest: (and you can view video here via CNN)
–About 8,000 people were estimated to be in Houston shelters Monday night, (Tuesday afternoon NZT) Mayor Sylvester Turner said. About 5,000 were expected to be in the Houston Convention Center, he said.
–The Galveston County Office of Emergency Management on Monday issued a mandatory evacuation order for Dickinson, Texas, according to spokeswoman Brittany Viegas. Dickinson is about 172 miles northeast of coastal Rockport. A dramatic photo circulating on the Internet showed residents of an assisted living facility in Dickinson being rescued on Sunday.
— Harris County has had “six suspected flood-related deaths” since Harvey made landfall last week, said Tricia Bentley, spokeswoman for the Harris County Institute of Forensic Sciences. The manners of death will be confirmed this week, she said. This brings the confirmed death toll to seven, which includes the previously reported deaths of a man killed in a fire in Rockport and a woman swept away in Harris County after exiting her vehicle in high water.
— The average annual rainfall in Houston is 50 inches. The city has seen 25 inches of rain in two days. Another 25 could fall by Saturday.
— Several cities, including Katy, Alvin, Friendswood, League City, Pasadena, Pearland, Seabrook and Webster, have instituted curfews.
— The Houston Independent School District has canceled school for the week for the district’s 215,000 students.
— Gov. Greg Abbott, Sen. John Cornyn, R-Texas, and possibly Sen. Ted Cruz, R-Texas, are scheduled to tour the Coastal Bend region on Monday.
— Dallas is opening a “mega-shelter” at the Kay Bailey Hutchison Convention Center, but Mayor Mike Rawlings said, “We may have thousands upon thousands upon thousands of more individuals that will get bigger than this convention center.”
— President Trump approved Louisiana Gov. John Bel Edwards‘ request for an emergency declaration. The governor said in his request that he believes Beauregard, Calcasieu, Cameron, Jefferson Davis and Vermilion parishes will face the brunt of Harvey’s winds and rain. The President said he will also visit Louisiana on Saturday.
— Energy provider CenterPoint says 96% of its Houston customers have power, but more than 104,000 are without electricity as crews experience difficulty reaching affected areas.
— The NFL said the Houston Texans’ preseason game against the Dallas Cowboys, scheduled for Thursday in Houston, has been moved to the Cowboys’ home stadium in Arlington, Texas. The MLB’s Astros and the University of Houston and University of Texas football teams — as well as Louisiana State University, which has a game scheduled Saturday in Houston — all have practices or games this week and were monitoring the storm before deciding if they will play.
– CNN with WeatherWatch.co.nz (live coverage on CNN in NZ on SkyTV channel 087 this afternoon)