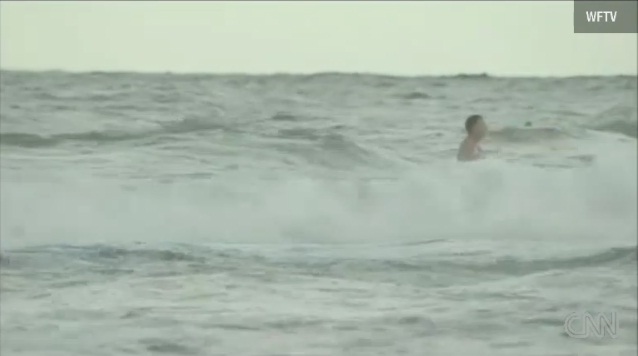 It started with a swim on a sunny afternoon off the Florida coast. Before long, the two men were nursing shark bites.

The pair were in knee-deep water when they got nipped a few minutes apart. One in the foot and the other in the shin about 100 yards away, the Volusia County Sheriff’s Office said.

They then went to nearby Bert Fish Medical Center for treatment of what authorities described as nonlife-threatening injuries.

Volusia County tied for most attacks

The incidents occurred Saturday afternoon off New Smyrna Beach, which is 14 miles south of Daytona Beach and about 50 miles northeast of Orlando.

One of the victims was in his 20s, while the other was in his mid-40s, according to the sheriff’s office.

The number of shark bites has gone up and down in recent years in the United States, with 51 attacks in 2001 and 53 last year. In 2009, there were only 29, according to the Florida Museum of Natural History.

More attacks take place off the Florida coast than in all of the other states combined.

However, most shark bites don’t end up being fatal. The fatality rate in the United States is just 2%. The last year that someone died in Florida due to a shark bite was 2010, according to the museum.