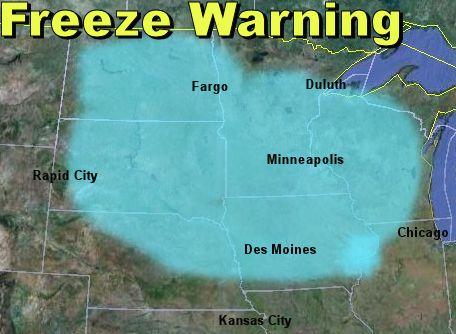 Growing up in the north-central United States, I am rarely surprised by rapid changes in the weather.  During the autumn and spring, the changes can be so dramatic, they can be life-threatening.  The Armistice Day Blizzard of 1940 brought such extreme temperature drops, heavy snow and high winds, that it killed 150 people.  Morning temperatures were in the teens to around 20 degrees.  By mid-afternoon, some places in Minnesota and fallen below zero.  By evening, the temperature had dropped into the teens below zero.  Up to 70cm of snow fell.  At the heart of the storm was an area of low pressure with a central pressure that bottomed out at 971 hPa.

Over the last 24 hours, a very rapid change was felt across the north-central US.  The change was not nearly as intense.  No severe weather occurred.  The weather was not life-threatening.  But against the backdrop of one of the hottest years on record, it was still a pretty amazing event.

It snowed in parts of Minnesota and Wisconsin.  About a month earlier than normal.

A strong disturbance combined with a blast of cold air from neighbouring Canada and wrung out enough moisture from the atmosphere to create the early season snow.

And it’s not just snow that’s early.  The growing season is likely to end Saturday night/Sunday morning (this evening NZST) across North Dakota, Minnesota, Wisconsin and Iowa where warnings are in effect due to the likelihood of a hard freeze.  Many of these areas usually don’t see a hard freeze until the first or second week of October.

Does this mean 2012 won’t break the all-time record for the hottest year ever in the US?

This is just a handful of states experiencing a quick blast of cold.  It will take a much bigger and more intense outbreak of cold weather to keep that record safe.