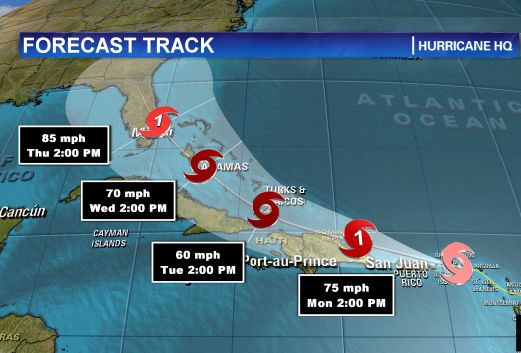 It’s the first hurricane threat to the United States so far this hurricane season – from tropical storm Irene which continues to strengthen slowly.

Authorities posted hurricane warnings for Puerto Rico and the Dominican Republic on Monday NZT as forecasters predicted Tropical Storm Irene would strengthen as it neared the Caribbean islands.

Tropical storm warnings covered the U.S. and British Virgin Islands, the northern coast of the Dominican Republic and Haiti.

The storm was expected to pass south of Puerto Rico this morning, strike the Dominican Republic on Tuesday NZT and could reach the southeastern United States by Friday NZT, forecasters projected.

“Some strengthening is forecast during the next day or so, and Irene could become a hurricane on Monday [Tuesday NZT],” the hurricane center reported.

The hurricane center warned that Irene could dump heavy rain on the Dominican Republic and neighboring Haiti, where previous storms have caused deadly mudslides down deforested hillsides. The NHC said Haiti and the Dominican Republic could see over 500mm in isolated areas, with 150 to 250mm possible across the rest of Hispaniola.

Meanwhile, the storm known as Harvey weakened to a tropical depression, but continued unleashing heavy rainfall over parts of Guatemala and eastern Mexico on Monday NZT.

The storm could still dump as much as 150mm forecasters said.

“These rains could produce life-threatening flash floods and mudslides, especially in areas of higher terrain,” the Hurricane Center said.

Harvey struck land Sunday on the coast of Belize as a tropical storm, with top winds near 100km/h. It is expected to dissipate over southern Mexico by early Monday.

The track of Irene will be well to the east and much stronger, cat 4 into the carolinas, maybe New York. Start reading Joe Bastradi on weatherbell.com he is brilliant, not to mention his views on global warming