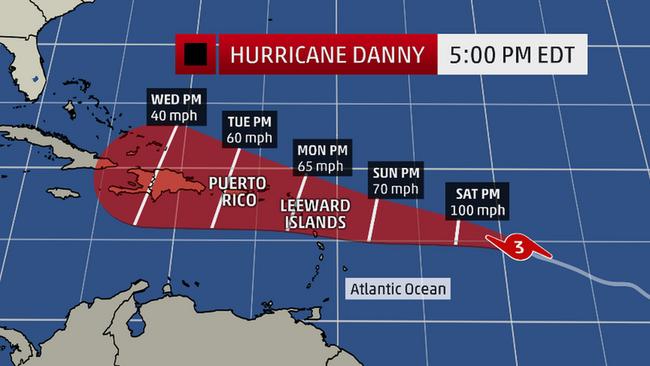 Danny’s sheltered environment of lower wind shear, the change in wind speed with height either in speed and/or direction, and ability to fend off surrounding dry air allowed it to become the Atlantic’s first major hurricane of the season Friday (late Saturday NZT).

Friday afternoon, a NOAA research plane not only sent back near real-time radar images from a hurricane for the first time, but also found maximum winds had increased to Category 3 intensity.

Danny’s tropical storm-force winds extended up to only about 60 miles from the center of circulation, a tiny wind field for a hurricane.

Comparisons were made to the much larger west Pacific typhoons Goni and Atsani.

However, the large-scale atmosphere Danny is moving into will induce weakening very soon. Satellite imagery indicated that the eyewall of Danny has begun to collapse and convection around the main circulation has become less robust.

Danny is approaching an ample reservoir of dry air extending westward into the Caribbean Sea.

Dry air hampers tropical cyclones by encouraging the development of stronger thunderstorm downdrafts, which then either squelch nearby thunderstorms from forming or push them away.

Danny is also approaching what has been so far this season a figurative Caribbean “wall of wind shear”. According to tropical meteorologist Phil Klotzbach, wind shear over the Caribbean Sea had been at record levels from mid-July through mid-August.

Wind shear can blow convection away from the center from a tropical cyclone. If strong enough, it can rip apart existing tropical cyclones. In addition, those increasing west to southwest winds aloft will transport more dry air into the circulation of Danny.

Therefore, Danny is expected to begin weakening this weekend upon encountering these twin atmospheric nemeses.

Danny will move generally toward the west-northwest the next several days, although there was a slight northward trend from Friday afternoon satellite imagery and computer model forecasts. Our latest forecast indicates the center of Danny would approach the Leeward Islands sometime Monday, most likely as a tropical storm.

Hurricane Arthur, a Category 2 storm, was the last hurricane to make landfall in the United States when it came ashore in July 2014 between Cape Lookout and Beaufort, North Carolina, the National Hurricane Center said.

It has been the longest period to pass without a major hurricane hitting the United States since reliable record keeping began in 1850, a 2015 NASA study said.

Though forecasters are calling for a below-average storm season in the Atlantic, Hennen said any hurricane that does emerge this year can have a strong impact.

According to the National Oceanic and Atmospheric Administration Climate Prediction Center, which has updated its 2015 Atlantic hurricane season outlook, there is a 90% chance of a below-normal hurricane season and a lower chance of expected storm activity in the United States this year.

Of the six to 10 named storms for this season, one to four storms are likely to become hurricanes in 2015.

Also, the Atlantic Ocean has had much cooler temperatures, which decreases the chances of major storm activity.

Since 1995, the United States has been in a high hurricane activity area, which typically lasts around 25 years. But for almost a decade, the country hasn’t seen a hurricane greater than a Category 3 storm, putting it in a nine-year hurricane “drought.”

The United States still has seen some big storms in the past few years. In 2012, hurricane-turned-cyclone Superstorm Sandy ravaged the Northeast with damaging flooding and powerful winds.