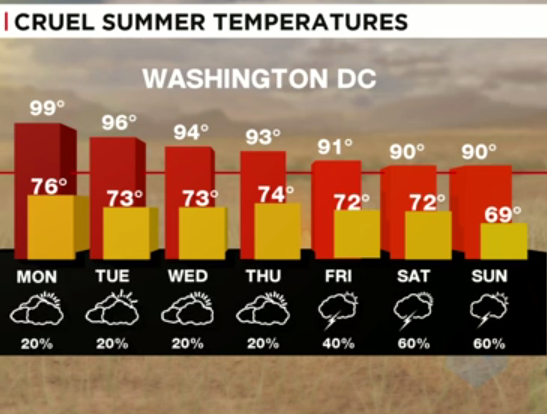 Dangerously high temperatures will keep scorching the Northeast United States in the wake of a deadly wave of heat and humidity that has plagued the Midwest.

Heat indexes well over 100 degrees are expected across dozens of states in the nation’s central and eastern portions, the National Weather Service forecasts. A heat index combines the effects of temperature and humidity on the human body.
Temperatures also could reach the century mark Monday afternoon in New York, Philadelphia and Washington.
Nearly 114 million people are under excessive heat watches, warnings and advisories in effect across 27 states on Sunday, CNN meteorologist Sean Morris said.

Dangerous, sweltering weekend ahead for much of US. Prep for heat & take care of one another https://t.co/wipkTPWDj7 pic.twitter.com/s27Cosdq9i

The sweltering Midwest weather claimed the lives of a handful of people in the Detroit area over the course of three days, Roseville Police Chief James Berlin told CNN.
Five elderly residents who had underlying health issues died as a result of the soaring temperatures, Berlin said. Residents were encouraged to stay hydrated and find an air-conditioned place to avoid heat exhaustion or heat stroke.

Police and firefighters in the Detroit suburb of Roseville are doing their part to help residents beat the summer heat. They are offering rides to cooling centers set up at the city’s recreation center and public library and distributing water to residents.

Heat is one of the country’s leading weather-related killers, and each year dozens of Americans die from overexposure to high temperatures, according to The National Weather Service.

Hot, dry and breezy conditions across the West Coast have also hampered efforts to contain the rapidly expanding Sand Fire. The fast-growing wildfire, which was only 18% contained Sunday, has consumed more than 22,000 acres.

Scientists note the record temperatures across the country could be part of a long-term global warming phenomenon. Last week NASA announced that every month in 2016 has been the hottest ever recorded.

Global temperatures were on average 1.3 degrees Celsius (2.4 degrees Fahrenheit) higher than average between January and June this year when compared to the late 19th century, NOAA said.

Could be part of a long-term global warming phenomenon, except when reality shows it’s not.

http://realclimatescience.com/wp-content/uploads/2016/07/Evaluating-The-Integrity-Of-Official-Climate-Records-4.pdf   Areal coverage of US heat waves used to be much larger. NASA has repeatedly altered their own data, making pre-1980 temperatures cooler doubling 1880-1980 warming by altering data.

https://science.house.gov/sites/republicans.science.house.gov/files/documents/HHRG-114-SY-WState-JChristy-20160202.pdf    In terms of heat waves, below is the number of 100 °F days observed in the U.S. from a controlled set of weather stations. It is not only clear that hot days have not increased, but it is interesting that in the most recent years there has been a relative dearth of them.

Global temperatures were on average 1.3 degrees Celsius (2.4 degrees Fahrenheit) higher than average between January and June this year when compared to the late 19th century, NOAA said……And we can believe them because… https://bobtisdale.wordpress.com/2015/06/04/noaancdcs-new-pause-buster-paper-a-laughable-attempt-to-create-warming-by-adjusting-past-data/

…..Comments from Georgia Tech Climatologist Dr. Judith Curry. The greatest changes in the new NOAA surface temperature analysis is to the ocean temperatures since 1998. This seems rather ironic, since this is the period where there is the greatest coverage of data with the highest quality of measurements – ARGO buoys and satellites don’t show a warming trend. Nevertheless, the NOAA team finds a substantial increase in the ocean surface temperature anomaly trend since1998…The global surface temperature datasets are clearly a moving target. So while I’m sure this latest analysis from NOAA will be regarded as politically useful for the Obama administration, I don’t regard it as a particularly useful contribution to our scientific understanding of what is going on.