USA – Check out these amazing picture of ‘Death Valley’ in bloom 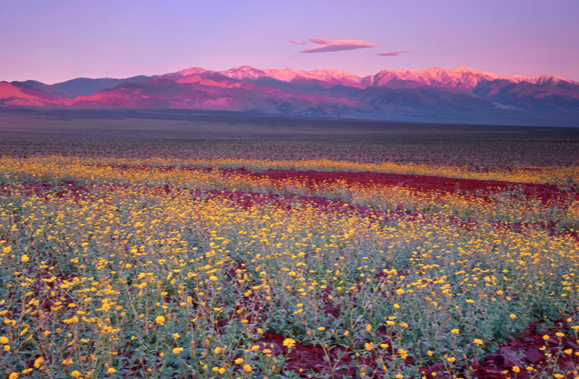 The mixture of fall and winter storms combined with warm sunshine has created a breathtaking sight to behold in Death Valley.

For the first time in more than a decade, the typically barren terrain is bursting with color.

Death Valley National Park was packed with tourists from all over the world as they flocked to see the phenomenon unofficially known as the “super bloom.”

The fields of desert gold, patches of purple, and wisps of white were all thanks to some unusual October storms that soaked the usually parched landscape.

Death Valley, one of the driest places on Earth, is taken over by millions of wildflowers https://t.co/XSaSmRvOumhttps://t.co/DNUC8ElLBl

“It washes away a coating on the outside of the seeds – seeds that have been sitting for years and it allows them to germinate,” Abby Wines, Management Assistant at Death Valley National Park explained.

Wines said she narrowly missed the last super bloom in 2005 and that the wait for this one was worth it.

“These flowers just look like they’re floating in the air,” she described.

Because the rare fields of flowers attracted so many tourists, many had issues trying to find a place to stay. Hotels close to the blooms were booked until mid-April, and for the next few weekends the closest available rooms were hours away.

Some rooms nearby were booked at nearly $600 per night. Hotels said many tourists were calling daily hoping to grab a canceled room.

Park officials said the super bloom should continue for some time. While flowers in the lower elevations were past their prime, park rangers said other varieties would continue to bloom at higher elevations until early June.