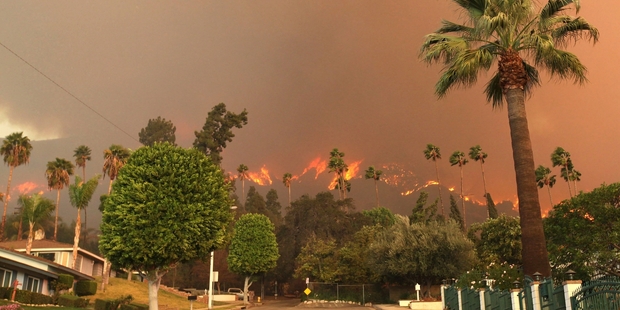 In November 1913, engineer William Mulholland opened a sluice gate to inaugurate the Los Angeles Aqueduct – built to carry water from the Owens Valley 375km south to the city – and declared: “There it is. Take it.”

Californians have been taking it, and water from elsewhere, ever since. Mulholland believed if you build they will come. Home to 2.3 million in 1913, by 2012 California had 38 million people. Cheap water made it possible.

But just as Mulholland cast a long shadow over the state’s history, a darker shade now threatens the future of the world’s 12th largest economy.

The official declaration means California can request federal aid and be more flexible with water transfers from the state’s massive irrigation infrastructure, says Heather Cooley, co-director of the Water Project at the Pacific Institute.

She says that though populous Southern California has got off fairly lightly, “we’re already seeing mandatory restrictions elsewhere, as drought impacts vary across the state, with some areas hit harder and earlier than others”.

Sacramento, the state capital, has reduced residential water in some suburbs as a key dam shrinks to critical levels halfway through the winter wet season.

Underlying the severity of the water crisis, the US Drought Monitor said 98.57 per cent of the state was “abnormally dry”, with 62.71 per cent in “extreme drought”. Just 8.6cm of rain fell last year, one-fifth of the average. “It’s huge,” says Christopher Burt, an historian with the Weather Underground, who says the first precipitation records, from San Francisco, date to November 1849. “The drought is the worst on record.”

One major concern is the Sierra Nevada snowpack, a frozen reservoir that supplies one-third of the state’s water as it melts to fill reservoirs. The snowpack is around 17 per cent of normal. “Normally we get 30 to 40 per cent of our snow by now,” says Roger Bales, director of the Sierra Nevada Research Institute at UC-Merced. “We’re only about 5 per cent of the way.”

The state’s rainy season lasts from October to April so there is still a chance of a drought-breaker, but Bales thinks this probability is less than 50 per cent.

“When you look at the 500, 1000 and 2000-year records you find extended dry periods longer than you find in the incremental record,” says Bales. Carbon dating of tree stumps indicates 150-year droughts in the past. The elephant in the room, as the 2014 drought deepens, is climate change; the Intergovernmental Panel on Climate Change [IPCC] warns of more extreme weather, including drought.

The drought’s immediate cause is an anticyclone parked off the West Coast for the past 13 months, an abnormal development that forces precipitation from the Gulf of Alaska to make landfall in Canada and the US Northwest.

This week a federal official said the American Meteorological Society will explore if the drought, and other extreme weather, is because of either natural variability or human-caused climate change, as many scientists suspect.

“We’re in an unprecedented era,” says Juliet Christian-Smith, a climate scientist with the Union of Concerned Scientists. A big problem, she says, is that California’s 20th century mindset – in policies, agencies and infrastructure – is inadequate to respond to the 21st-century challenge of climate change.

Used to short droughts, she thinks the unofficial state water policy “has been to hope next year will be a rainy year”.

Certainly, prolonged drought will have serious repercussions for America’s largest state economy. Take agriculture, which consumes 77 per cent of state water supplies, either from ground water or by irrigation sourced from the snowpack, the Sacramento-Jan Joaquin Delta and the Colorado River.

“California accounts for 15.5 per cent of farm receipts in the US,” says Burt. “It’s also the number one state for exports of agricultural products in the US.”

Farmers – mostly large corporate concerns – benefit from cheap water, regular sunshine and chemicals, a byproduct of the fossil fuel industry. Many have switched to profitable speciality crops, like almonds, that cannot be fallowed and need regular irrigation. That business model may have run its course.

Conversations about a more sustainable alternative have to decide between more dams and pipelines, or recycling, conservation and ground water clean-ups [many aquifers are heavily polluted by nitrates from agriculture].

In 2010, the state revised its residential plumbing code to include grey water recycling systems. The state is also looking at building twin tunnels to carry water beneath the delta from northern to southern California, a water grab that echoes Mulholland.

Brown, up for re-election in November, wants steps taken now to curb carbon emissions. “If it’s like this five years from now, it’s over,” he said last May. The governor is an advocate for electric cars in a state that already has tough emissions standards.

Yet at the same time, Brown supports energy companies that want to frack shale oil from the Monterey Shale, which lies below some of the state’s most productive agricultural land, along with urban areas – a contentious prospect.

A Los Angeles Times poll in June said 58 per cent wanted a moratorium on hydraulic fracturing, while a Public Policy Institute of California poll in August – when Brown exempted fracking from environmental laws in SB4 – found 65 per cent wanted immediate steps taken to reduce greenhouses gases.

The US Environmental Protection Agency calculates burning the 15.5 billion barrels of oil in the Monterey Shale will generate 6.6 billion tonnes of carbon dioxide. Fracking releases methane, which the IPCC says is 34 times more potent as a greenhouse gas than CO2 and fracking is water hungry. Oil Change International says fracking all known wells would consume 5 billion gallons of water.

“The governor talks a good game on climate change and has taken some serious action. But when it comes to the oil industry he seems to be turning a blind eye to a very serious water issue and a very serious climate issue.”

It remains to be seen when the penny will drop about the nexus between the fossil fuel industry, compliant politicians, greenhouse gas emissions, climate change and more frequent extreme weather that puts people in harm’s way.