USA – California braces for a new round of storms 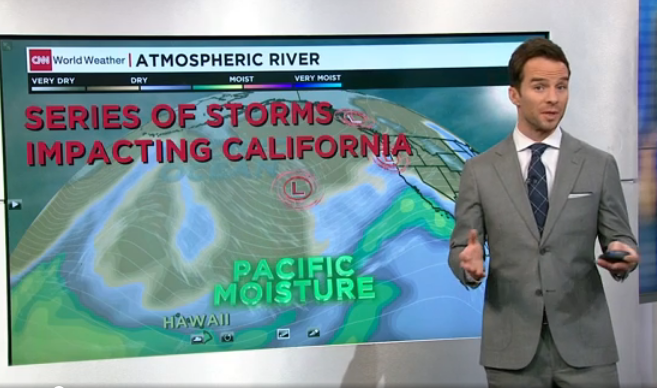 Residents of northern and central parts of California, already drenched by weeks of rain, prepared for possible flooding and landslides as another round of storms pummeled the state.

More than 14 million people are under a flood warning or flash-flood watch and residents have been advised to prepare for evacuations. 150 to 250mm of rain could fall from San Francisco eastward before the storm tapers off, CNN meteorologist and friend of WeatherWatch.co.nz Dave Hennen said yesterday.
“Gather important items, documents and medications in a ‘go bag’ in case you need to evacuate quickly,” the National Weather Service in Sacramento said in an advisory. ” Don’t forget to plan for your pets, too. Make sure your vehicles have a full tank of gas.
In Salinas, south of San Francisco, some evacuating residents had to be rescued by boat Monday, CNN affiliate KSBW reported. Other people in Monterey County have been waiting days for electricity to be restored.
“We’re on our 56th hour without power now and it’s getting a little brisk inside the house,” Gary Bolden of Prunedale told KSBW.
At the San Joaquin River Club, a private residential area east of San Francisco, residents have been patrolling the river levees and discussing possible evacuation routes, reported CNN affiliate KPIX.
“We have a levee response team, a sand bagging team, teams to check on what walkers checking on the levees find,” resident Paula Martin said. “Our community is pulling together like real champs.
Water was being released from the Anderson Dam in Morgan Hill, which was expected to cause downstream flooding, San Jose Mayor Sam Liccardo said on Facebook.
San Jose resident Ruben Lechuga told CNN affiliate KGO he hoped his local creek wouldn’t spill, adding, “But if it does, we just move out for a while and see what happens. It’s all we can do.”
Read more and see video forecasts here via CNN.com