USA: Atlantic hurricane season could be busiest since 2010 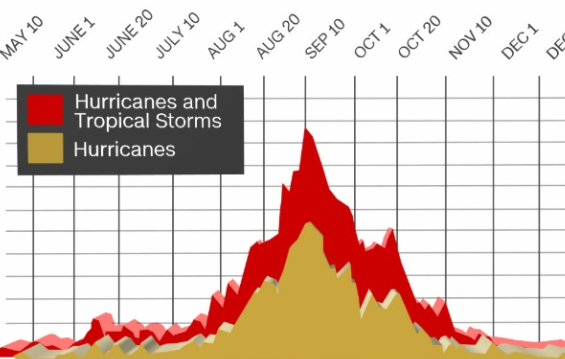 By CNN Meteorologist & friend of WeatherWatch, Brandon Miller — Unseasonably warm ocean temperatures and a no-show from El NiÃ±o will contribute to what may be the busiest Atlantic hurricane season in seven years, the National Oceanic and Atmospheric Administration announced on Wednesday.

NOAA estimates the ocean will see 14 to 19 named tropical systems this year, up from the 11-17 they had predicted in a previous outlook released in May.
“The season has the potential to be extremely active, and could be the most active since 2010,” NOAA said on Wednesday.
The 2017 hurricane season officially began June 1 and ends November 30.
Though NOAA’s outlook still calls for 5 to 9 hurricanes, the latest update increases the number of likely major hurricanes by one, to 5.
Hurricane Franklin, located in the southern Gulf of Mexico’s Bay of Campeche, is the season’s first hurricane and will move into Mexico early on Thursday.
Click here to track Franklin
NOAA’s upgraded outlook agrees with last week’s update from Colorado State University.
CSU predicts 16 named storms — including the five that have already occurred — with eight becoming hurricanes and three reaching major hurricane status (winds above 179km/h).

“This season has had a running start,” according to Ben Friedman, acting NOAA administrator. Tropical Storm Arlene formed briefly in April in the north-central Atlantic. An extremely rare occurrence, Arlene was just the second named storm on record for the month of April.
Since then the season has remained above average with respect to the number of storms, with six named storms by August 6. On average, the sixth named storm does not occur for another month, around September 8.
Even though the calendar says we are over one-third of the way through the hurricane season, we are just getting into its busiest part. In fact, over 75% of the named storms come during the peak months of August, September, and October.
>>READ THE FULL STORY via CNN by clicking/tapping here