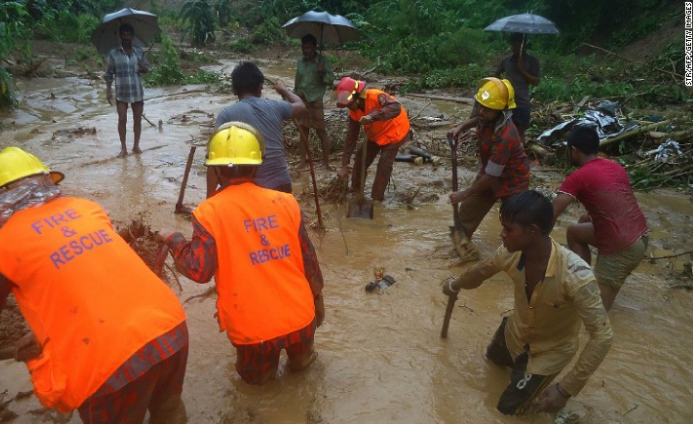 The highest total, 98 deaths, were reported in the hilly Rangamati district, where rescuers found bodies buries under mud, relief and rehabilitation officer Biswanath Majumder told CNN.
Another 29 died in the port city of Chittagong and six others died in the neighboring Bandarban district, said Reaz Ahmed, director general of the Department of Disaster Management.
Rescue operations led by Bangladesh Army troopers were ongoing late Tuesday as many people were still missing, Ahmed said
The casualties included included two Army officers and two soldiers who were trapped under a fresh landslide while taking part in rescue operations, he said.
An Army statement said Major Mohammad Fazlul Haque, Captain Tanvir Salam Shanta, Corporal Mohammad Azizul Haque and soldier Md Shahin Alam were killed while trying to restore road communications. Ten other Army members of the same team were injured and one was still missing, the statement said.
Incessant rains that began early Monday following a depression in the Bay of Bengal flooded the districts, leaving thousands of people marooned.
Many parts of Chittagong, the country’s second largest city, were under waist-deep water.
Nearly 1,000 houses were badly damaged in the Rangamati district, affecting several thousand people, Majumder said.
Many of the houses were completely enveloped by the slide at night and rescuers feared more deaths as people were sleeping when the disaster struck.

Heavy rains paralyzed the Dhaka-Narayanganj-Demra dam areas on Tuesday.
Seventy-seven injured people were rescued alive and hospitalized in the Rangamati district, Majumder said.
The landslides also cut off road access and communications networks in Rangamati, cutting off the district from the rest of the country, officials said.
“Several hundred rescuers from the Army, Fire Service and Civil Defense, police and local volunteers were searching for people still alive,” Ahmed said.
Ahmed said that there was no exact total of the missing in the three districts, but residents feared many people were still unaccounted for.
“We’ve rescued and evacuated around 2,300 people in Rangamati and Bandarban, and they have been taken to safer shelters,” he said.
– By Farid Ahmed, Special to CNN