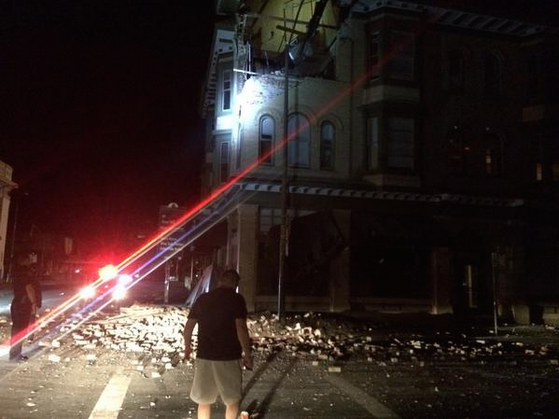 In Napa, at least 90 people were injured, three critically, including a young child, according to Queen of the Valley Hospital spokeswoman Vanessa deGier.

One child was hurt when a fireplace collapsed and has been airlifted to UC Davis Medical Center, deGier told CNN.

“The majority of injuries that we are seeing are non-life-threatening, but still serious,” she said. “Lots of lacerations and abrasions, obviously from fallen debris.”

It was the strongest earthquake to hit the Bay Area since 1989, when a quake struck during the World Series. Gov. Jerry Brown declared a state of emergency.

Sunday’s earthquake struck 4 miles northwest of American Canyon, 6 miles southwest of Napa, and 9 miles southeast of Sonoma, according to the USGS.

At least 30 water main breaks and leaks were reported, according to Napa public works director Jack Rochelle. “We have our crews out assessing all those locations,” he said at a news conference. Water will be shut off to any damaged water main as quickly as possible, and the water that is still flowing is safe to drink, he said.

The earthquake triggered six major fires, including several mobile homes that completely burned down, Callanan said. The city has turned Napa High School into a shelter for those who have lost their homes.

Some historic buildings in downtown Napa showed extensive damage and at least 15,000 customers in and around Sonoma, Napa, and Santa Rosa lost power, according to Pacific Gas and Electric Company.

“I’ve got a lot of broken wine, being here in Napa,” said Emily Massimi, who was woken up by the quake. “We tend to collect wine, so I have wine all over my kitchen, and glass, and pictures off the wall and books off of bookshelves,” she told CNN.

At Silver Oak Winery, owner David Duncan spent the morning cleaning up hundreds of broken wine bottles that fell off the shelves.

“Those bottles were very unique,” he said. They were part of his private collection and worth hundreds of dollars. “It’s a tragedy, but it’s nothing we can’t overcome.” Duncan said he plans to open the winery today.

The quake jolted downtown Napa resident Karen Lynch. “The refrigerator flew open and all the food fell out,” she told CNN.

“It was not like other quakes we have felt,” Lynch said. “This was a violent quake, jolting us to and fro.”

There have been at least five aftershocks so far, according to the USGS, ranging from 2.6 to 3.6 magnitude