USA: 250 buildings burn in Tennessee, thousands evacuated due to wildfires 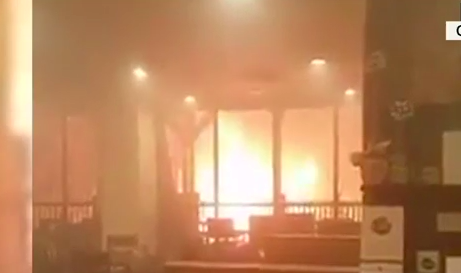 Developing News — Fanned by strong winds and the Southeast’s worst drought in nearly a decade, at least 14 wildfires burned in and around Gatlinburg, Tennessee, forcing evacuations from the popular tourist destination and nearby communities.

“If you’re a person of prayer, we could use your prayers,” Gatlinburg Fire Chief Greg Miller said Monday evening as crews battled wind gusts of up to 70 mph (113km/h).

The winds also knocked down power lines, igniting new fires, according to authorities.

“Everything was like a perfect storm,” said Cassius Cash, superintendent of the Great Smoky Mountains National Park, to CNN affiliate WATE.

There were no deaths reported in connection with the fires, according to the Tennessee Emergency Management Agency. But a male evacuee reportedly suffered burn wounds and an accident involving a fire truck may have also caused minor injuries, the agency said.

Several homes and businesses in downtown Gatlinburg were “completely lost to fire,” according to authorities. By Tuesday morning, the scope of the disaster was difficult to quantify, with officials unable to give estimates for the number of fires, their size, injuries and how many structures had burned. But a report hours earlier from TEMA reported at least 30 structures had been impacted, including a 16-story hotel and an apartment complex that was consumed by flames.
Staff at Ripley’s Aquarium of the Smokies in Gatlinburg were forced to evacuate Monday evening, but all of the facility’s 1,500 animals are still inside, Ripley Entertainment Regional Manager Ryan DeSear told CNN Tuesday.
DeSear said that according to reports he has received, the building is still standing. The facility’s webcam showed lights and power still working inside, but he’s concerned about the deteriorating air quality, as well as the smoke and flames. DeSear said he’s hoping some staff will be allowed back into the facility Tuesday morning to assess the damage.

– This is CNN Breaking News – click here for the latest