US – Widest ever tornado claimed another chaser 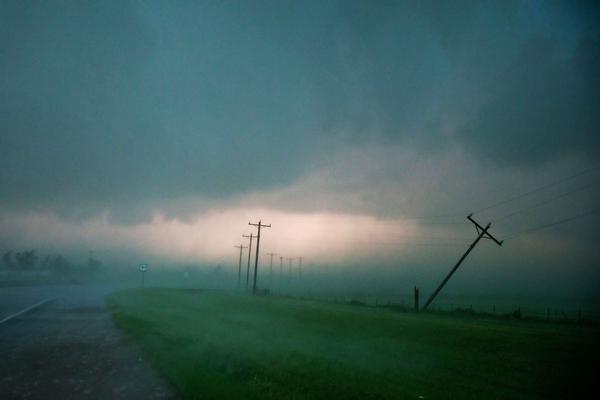 The tornado that struck near El Reno, Oklahoma last Friday has now been upgraded to an EF5, and with a width of 4.2km, it is now the widest tornado on record. The previous record for the widest known tornado was 4km near in Nebraska on May 22, 2004.

Although survey teams only found damage of EF3 intensity, mobile doppler radar found winds estimated to be greater than 295 mph several times and at several locations less than 155 metres above the ground along the south side of the tornado. This doppler radar measurement is far above the 320kph winds needed to receive this top EF5 rating.

This is the second EF5 rated tornado in Oklahoma in a matter of a few weeks. The other, devastating Moore, Oklahoma on May 20, 2013, also received this top rating on the Enhanced Fujita Scale.

The death toll from Friday’s tornadoes and flash floods in Oklahoma has increased to 18. The Oklahoma medical examiner’s office said Monday that 18 people died as a result of the powerful storms that swept through the Oklahoma City area late Friday. At least four of the victims were actively pursuing one of the tornadoes as it churned west of Oklahoma City.

Five tornadoes touched down Friday, along with heavy rain that caused widespread flooding.

The death of a fourth man actively pursuing the same storm. Richard Charles Henderson, 35, sent a photo to his friend George Slay just minutes before the tornado killed him. Henderson was a resident of nearby Hinton, Oklahoma and was an amateur storm chaser.

More storms are possible in Oklahoma this week. Localized pockets of large hail and damaging wind gusts are the main concerns throughout the week, with a risk of a few tornadoes.