US: Twin winter storms slam Pacific Northwest – up to 3 metres of snow forecast 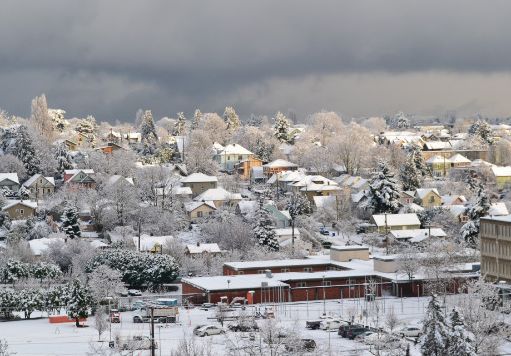 Seattle could see one of its largest snowfalls since the 1940s as twin winter storms move over the Pacific Northwest, according to the National Weather Service.

Between 13 and 25cms of snow could hit the Seattle-Tacoma area Wednesday (across Thursday NZT), said Dustin Guy, a meteorologist at the weather service’s Seattle office.

Precipitation moving in from the south and west is combining with cold air moving south from Canada to create the heavy snowfall, Guy said. If snowfall amounts top 18cms, the winter weather event will rank among Seattle’s 10 worst since the early 1940s, Guy said.

High-wind warnings were in effect along the coast, where winds could gust to hurricane force — knocking down trees and causing power outages, said CNN meteorologist Taylor Ward.

Mountainous areas of the Pacific Northwest will see even more snow, with the largest accumulations on the eastern slopes of the Cascades, according to the weather service. Significant snowfall is expected across southern Washington, northwest Oregon and into western Idaho. Portland could see about 3 inches, according to Ward.

From late Tuesday through early Thursday, 60cms to 1 metre of snow is forecast for the mountains east of Seattle, Guy said. Mount Rainier could see 3 metres of snow by Friday (Saturday NZT).

Image / This picture is from CNN iReporter Kyle Aevermann’s Seattle neighborhood, First Hill, next to the downtown area.

The first storm moved into the area Monday and Tuesday. The second and stronger storm was forecast to hit Wednesday into Thursday (US times).

“It’s pretty big when you get back-to-back storms like that,” weather service meteorologist Roger Cloutier said.

Scattered areas near Easton, Washington, along Interstate 90 in the Cascade Mountains 55 miles east of Seattle, have already received 81cms of snow, Cloutier said.

The snowfall extends south into Oregon, with as much as 45cms forecast for the Bend area. CNN affiliate KTVZ-TV in Bend said an earlier round of snow over the weekend gave a boost to local ski resorts but also created treacherous driving conditions that left at least one motorist dead.

Those conditions were expected to worsen. Winter storm warnings were in effect across the region.

“Expect extreme travel difficulties to develop on Wednesday,” the weather service said, advising those who must take to the roads during the storm to carry a flashlight, blankets and extra food and water.

The Washington State Department of Transportation said 1,250 workers will use nearly 500 pieces of equipment statewide to treat and plow roadways.

The heavy snowfall will be followed by rain, which could produce ponding water and urban flooding, Guy said.

“It’s just gonna be a mess all around,” he said of the coming few days in the Seattle area.

Cloutier said even though computer models are trending colder and colder for the coming days, the heavy snow will eventually pose a flooding threat.

“When the snow does finally melt, you can almost guarantee there will be some flooding somewhere,” he said.

– CNN.com (converted to metric by WeatherWatch.co.nz