Home > News > US tornado numbers plummet in May...

US tornado numbers plummet in May 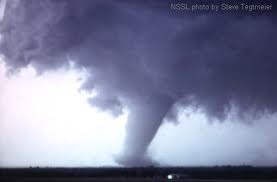 After last year’s devastating tornado season, the US is welcoming what has seemed like a relatively minor tornadic pattern this spring.  May is traditionally the peak of tornado season.  However, May 2012 could go down as one of the lowest tornado ‘May’s’ in decades.

May, 2012 did not have a single tornado fatality.  That hasn’t happened since 2005.   What caused this unusual weather pattern?

“This lack of tornadoes seems to relate very well to the jet stream,” reports Dr. Forbes. “It had gone way north, more like a mid-summer location rather than a late-spring location.  Normally the jet stream cuts across Oklahoma during May.  In this case it was in North Dakota,  which is 750 miles north of it’s typical location. “

States like Oklahoma, which is in the heart of so-called tornado alley, had a relatively mild tornado season.

“Thunderstorms are like hot air balloons,” explains Dr. Forbes. “They will only rise if they’re warmer than what they go through.  There was unusually warm air at 10,000 feet so it was harder for thunderstorms to develop.  With the jet stream so far north and the air warmer, it was not very favorable for storms in the Southern and Central Plains.”

What’s Next in June?

June is off to a swift start. At least 23 tornadoes were reported on June 1, including more than a dozen from a storm system that moved through the Mid-Atlantic.

“That’s a strong start for June,” reports Dr. Forbes.  “The average June day has 8 tornadoes.  So, it started out very active.”

While June is still a fairly active tornado month, averaging 227 twisters over the last 10 years, Dr. Forbes says it has quieted down to a more normal pattern since the Mid-Atlantic outbreak on June 1.

“The last few days have dropped down to normal or tad below,” says Dr. Forbes. “”It’s a pretty sporadic pattern.”