US tornado death toll 283 and climbing 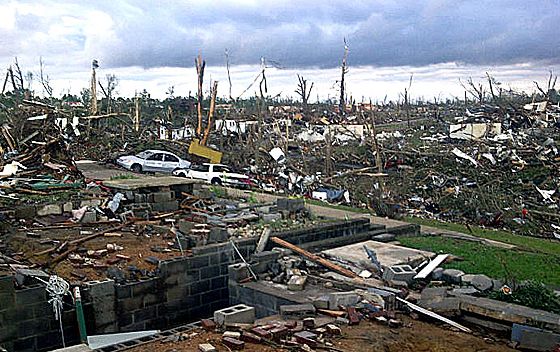 “This could be one of the most devastating tornado outbreaks in the nation’s history by the time it’s over,” – Sean Morris, CNN Meteorologist.

Public and private assistance — in the form of food, tarps and hugs — began arriving Thursday in storm-battered Southern communities that lost nearly 300 people and saw once-familiar neighborhoods reduced to piles of debris.

The grim death toll continued to rise across the region, with 283 counted in six states.

See VIDEO of two of the tornados, view now on our Video Page

The governor and other officials stood in the bright sunshine in Tuscaloosa, the epicenter of the state’s misery, to detail the damage and recovery effort.

“People’s lives have just been turned upside down,” Bentley said. “It affects me emotionally. When I fly over this, it is difficult.”

A breakdown provided by Bentley’s office showed that violent weather claimed lives in 16 Alabama counties. Thirty-five people perished in DeKalb County in northeastern Alabama; the death toll in the hard-hit city of Tuscaloosa, in west-central Alabama, was at 36 as of Thursday morning, said Mayor Walter Maddox.

“I don’t know how anyone survived,” Maddox said. “We’re used to tornadoes here in Tuscaloosa. It’s part of growing up. But when you look at the path of destruction that’s likely 5 to 7 miles long in an area half a mile to a mile wide … it’s an amazing scene. There’s parts of the city I don’t recognize, and that’s someone that’s lived here his entire life.”

Tuscaloosa tornado ‘absolutely shocking’ Entire neighborhoods were leveled and hundreds of thousands of people were without power in the affected regions. As of 10 a.m. (11 a.m. ET), Alabama Power said nearly 348,500 customers had no electricity.

As of Thursday afternoon, about 51,000 people in Georgia were without power, according to Georgia Power and the Georgia Electric Membership Corp. Bentley estimated as many as half a million to a million people had no electricity in Alabama.

“This could be one of the most devastating tornado outbreaks in the nation’s history by the time it’s over,” CNN Meteorologist Sean Morris said.

Long before the death toll mushroomed, governors in Alabama, Mississippi and Georgia had declared states of emergency within their borders. Virginia followed suit Thursday. Mississippi Gov. Haley Barbour said Thursday he was asking for a statewide emergency declaration.

President Barack Obama on Thursday called the loss of life from storms in the South “heartbreaking,” especially in Alabama. The “federal government will do everything we can to help (people affected by the deadly storms) recover,” he said.

Obama announced late Wednesday he had approved Bentley’s request for emergency federal assistance, including search and rescue support. The White House said Obama will travel to Alabama on Friday.

Bentley said Thursday he is asking Obama for a major disaster declaration. According to FEMA, such declarations are made when “an incident is of such severity and magnitude that effective response is beyond state and local capabilities and that federal assistance is necessary.”

In the DeKalb County, Alabama town of Rainsville, 25 bodies were recovered near a trailer park, said Police Chief Charles Centers. Many people are unaccounted for, Centers said, and authorities haven’t even been able to reach all the affected areas yet, because some roads are impassable. Patrol cars are running out of fuel, and buildings including a school, homes and several businesses have been damaged or destroyed.

Israel Partridge, a local business owner who teaches search-and-rescue and who volunteered to help the Rainsville Fire Department Wednesday night, said one tree that had been uprooted and tossed still had a dog alive, tied to it. Partridge said he freed the dog and gave it to a family to take care of.

The Nuclear Regulatory Commission said it was monitoring the Browns Ferry nuclear power plant near Athens in north Alabama, about 32 miles west of Huntsville, after it lost offsite power Wednesday night due to the storms. The three units at the plant shut down automatically when power was lost, it said.

TVA spokeswoman Barbara Martocci told CNN no radiation was released as a result of the shutdown, and the plant is currently in a safe shutdown mode.

At least one strong tornado swept through Tuscaloosa, leaving dozens of roads impassable and destroying hundreds of homes and businesses.

Resident James Sykes said the massive twister was “like a silent monster. It was just moving at a steady rate and just demolishing everything in its path.”

“It literally obliterated blocks and blocks of the city,” Maddox, the Tuscaloosa mayor, said. He told CNN Thursday morning the devastation was “unparalleled … the city’s infrastructure has been absolutely decimated.”

“We’ve lost two water tanks on the east side of the city, which is crippling the water supply,” he said. “We’re facing an overwhelming situation in which we are short of men, materials and equipment.” But he said Bentley has been “outstanding” in mobilizing resources.

“We’ve lost our environmental services,” he said. “We’ve lost police precincts. We’ve lost fire stations. So our own infrastructure itself, which would deal with these issues, has been crippled. It’s just compounding the situation.”

“Except for the sirens, it had an eerie quiet this morning,” said Brian Wilhite, an internist at Tuscaloosa’s Druid City Hospital. “It looks like an atomic bomb went off in a straight line. It’s probably close to a mile wide.”

The University of Alabama, located in Tuscaloosa, escaped mostly unscathed, but Bentley said some students living off-campus were among the dead, and Maddox said there is a “strong possibility” that that is true. Classes were canceled Thursday.

The university will not conduct final exams as scheduled next week and commencement has been rescheduled from May 7 to August 6, according to the school’s website.

The northwest corner of the city was particularly devastated, he said, with hundreds injured and many others missing.

The Birmingham neighborhood of Pratt City and the suburb of Pleasant Grove were among the hardest hit areas.

“My bathroom is across the street,” Talesha Oliver told WBMA.

More than 1,100 people were treated for injuries at trauma centers in the affected areas, including those treated and released.

A Facebook page was set up for users to claim photos and documents found strewn by the storms.

“House mortgage from Tuscaloosa found in Rainbow City,” said the caption on one photo. The two cities are 116 miles apart.

“It is tornado season, but an intensive event like this only will occur maybe once or twice a year,” he said. “It’s very rare to have all these ingredients come together.”

The town of Ringgold, Georgia, about 17 miles southeast of Chattanooga, Tennessee, was hit particularly hard, officials said. The storm also unleashed as many as 80,000 chickens in Pickens County, Georgia, after four huge coops were destroyed.

The storms are being compared to the “super outbreak” of tornadoes April 3 and 4, 1974, Fugate, the FEMA administrator, said Thursday. In that period, 148 tornadoes were reported in 13 states, and 330 people died. States affected were Alabama, Georgia, Illinois, Indiana, Kentucky, Michigan, Mississippi, North Carolina, Ohio, South Carolina, Tennessee, Virginia and West Virginia.

See CNN’s Video and Photos of the tornados

In this article they say “It’s very rare to have all these ingredients come together”, what weather ingredients have made this tornado season so devastating?

Hi Melissa – we’re hoping to hear from our contacts in Atlanta at The Weather Channel once things have calmed down a little to find out first hand what has made this outbreak so bad.

What a terrible weather event! the magnitude of damage and death couldn’t be more severe.