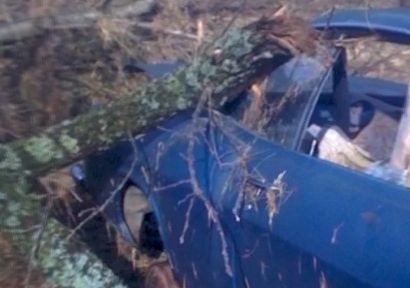 A line of fast-moving storms and possible tornadoes stretching from the Gulf Coast states to Illinois left at least six people dead Friday and caused widespread damage to homes and businesses, as forecasters warned of more potentially severe weather.

The storm injured residents and destroyed some 25 homes in Phelps County after it earlier left more than a dozen people hospitalized in northwestern Arkansas, medical officials said.

Missouri Gov. Jay Nixon declared a state of emergency, according to a statement from his office.

“The state of Missouri is ready to provide whatever resources are necessary to help with rescue, recovery and public safety operations in the wake of these deadly storms,” Nixon said. “As cold weather settles over Missouri later today, a quick and coordinated response is vital to protect lives and property.”

A fire station, three buildings and one store were also damaged, said Garrity, and an airport that serves northwestern Arkansas was closed due to debris in the area.

“We are in part of tornado alley,” he said. “So even a small storm does a lot of damage.”

Emergency crews are currently surveying the extent of the damage and “making sure that no one is trapped,” he said.

The storm killed two horses, according to Garrity.

Elsewhere, the fast-moving storm caused injuries and damage in Pulaski and Laclede counties in Missouri, knocking out power at Fort Leonard Wood, a U.S. Army post that took a direct hit from a suspected tornado, according to Laclede County Emergency Management spokesman Gail Teter.

Teter reported some injuries, although initial attempts to contact the base were unsuccessful.

The series of storms that moved through Oklahoma and into northwest Arkansas and southwest Missouri have reached speeds of 40 mph and passed through more populated areas in St. Louis, Missouri, and the surrounding municipalities.

Search and rescue workers were deployed to assess the storm’s damage in St. Louis County, where there were reports of injuries, according to Mark Diedrich, the county’s emergency management acting director.

The storm also left heavy structural damage to buildings in its wake — including a popular shopping center and Catholic church — in the town of Fenton, some 18 miles southwest of St. Louis, said Fenton Deputy Fire Chief Jeff Heidbreder.

Emergency crews are surveying the damage, he said, but there were no reports of injuries.

In the nearby town of Ballwin, police spokeman Jim Heldmann said the storm caused heavy damage to homes and buildings, but no injuries were reported at this time.

The Arkansas Department of Emergency Management issued a tornado advisory as bad weather lingered in the state, instructing residents to seek shelter in their home’s interior rooms or on its lowest floor.

“When a tornado is sighted, the most important rule is to get low and stay low,” the statement said.

The threat of severe thunderstorms and possible tornadoes will continue through Friday evening across the Mississippi Valley and Tennessee Valley states, according to Greg Carbin, meteorologist for the National Weather Service.