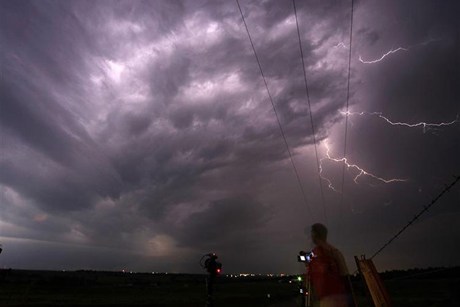 A major storm next week is poised to bring much needed rain, heavy snow and dangerous thunderstorms to the Plains.
The main storm will be preceded by a lesser system with spotty rain, snow and thunderstorms during later tomorrow into Monday. However, the main event over the Plains will begin Monday night and Tuesday and will sprawl eastward as the week progresses.

Snow
Depending on how quickly cold air is utilized on the northern flank of the storm, there could be a swath of heavy snow from large areas of Colorado and Wyoming to parts of Nebraska, South Dakota and Minnesota.
Denver, Cheyenne, Wyo., and North Platte, Neb., are a few cities that could receive snow from the storm, depending on its track.
Enough snow could fall in some areas, combined with strong wind to lead to significant travel delays.

The timing and location of the severe weather will be periodically adjusted as more information become available. The severe weather outbreak will unfold early in the week from the central Plains to Texas and will shift eastward over time through the remainder of the week reaching parts of the Mississippi and Ohio valleys.

Severe Weather
Farther south and east, in the storm’s warm sector, a severe weather outbreak is bound to unfold.
There is a possibility of violent thunderstorms in parts of Texas, Oklahoma, Arkansas, Kansas, Missouri and Louisiana.
While it is a bit too early to say with certainty the exact coverage, nature and timing of the thunderstorms, the risk includes the full spectrum of severe weather ranging from large hail and damaging wind gusts to flash flooding, frequent lightning strikes and even tornadoes.

Rain
In between the snow to the north and severe thunderstorms to the southeast, a zone of drenching rain is likely.
The exact swath of the heaviest rainfall, like the snow and severe weather area, will depend where and how the storm negotiates the high country of the West. However, states that could receive some of the drenching rainfall include Kansas, Nebraska, Iowa, Minnesota, Missouri and South Dakota.
Part of this area could receive 50mm of rain with the potential for much more.