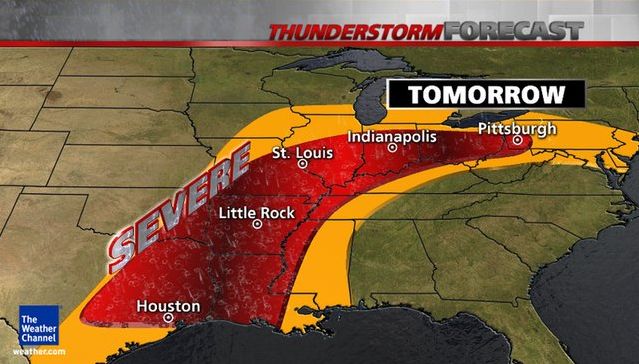 As much as 60 cm of snow is possible for parts of South Dakota.  30-60 cm of snow combined with strong winds have prompted Blizzard Warnings for parts of Colorado and Utah.  The heavy snow is already responsible for closing parts of some major highways.

The state of Minnesota is seeing the greatest variety of weather.  On the southwest side of the state, heavy snow is causing schools to close.  Freezing rain is icing up roads and making travel extremely hazardous.

But just a less than 300 km away, the severe weather is decidedly more summer-like.  Severe thunderstorms producing large hail and damaging wind have been reported in south-eastern Minnesota.

Meanwhile, less than 200km north of that, the Minneapolis/St. Paul metro area could see 30-45 cm of snow by Thursday.

And as if this wasn’t enough, the potent storm system brings a threat for severe thunderstorms and tornadoes to a large part of the nation’s mid-section.  The severe thunderstorm threat extends from Indiana and Ohio, back along the Mississippi River valley including the states of Illinois, Missouri, Arkansas, Texas and Louisiana.

WeatherWatch.co.nz Analyst Howard Joseph says it is not usual to see heavy snow in April.  It is not even unusual to see snow and severe thunderstorms so close together.  But Mr Joseph says that this particular spring storm is much colder than most.

Mr Joseph says “Spring is a transitional season so we expect huge temperature contrasts.  But this is a particularly cold air mass that is driving this very stormy system.  The sharp temperature contrasts and a very unstable atmosphere supporting the rising motion of the air is leading to this wide variety of very intense weather over a very large part of the continental United States.”