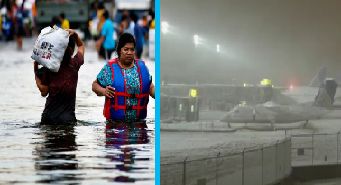 Flooding is continuing to affect Thailand and authorities are now seriously concerned about a significant disease outbreak.  Meanwhile in the US a huge and very early snow storm has caused travel problems for 4 million people – roughly the same number as New Zealand’s entire population. While a further 1.7 million Americans are without power.  The following reports are from CNN.

Widespread power outages and transit delays marked the start of a challenging week for millions of residents of the Northeastern United States, where a freak October snowstorm dropped more than 2 feet of snow in some places.

Close to 1.7 million customers in five states remained without power Monday evening, and officials warned it could be Friday before power is back on everywhere.

Utilities throughout the region reported significant progress in restoring power, but the cold, snowy conditions and house-by-house nature of the damage was slowing work, officials said.

At least 13 deaths have been blamed on the weekend storm, which prompted emergency declarations from the governors of New York, New Jersey, Connecticut and Massachusetts, and also put Halloween trick-or-treating plans in jeopardy.

About a dozen Massachusetts cities have postponed Halloween celebrations, according to CNN affiliate WGGB.

Time-lapse of the snowfall in New Jersey At least 20 Connecticut cities and towns, including the capital city of Hartford, canceled events or asked parents to wait until later to take their kids trick-or-treating, according to CNN affiliate WFSB-TV. Even Gov. Dannel Malloy and his wife, Cathy, said they will be leaving the lights off.

“No amount of candy is worth a potentially serious or even fatal accident,” the governor said in a statement.

In Worcester, Massachusetts, officials asked residents to postpone celebrations until Thursday, when temperatures are expected to climb to 60 degrees. Trick-or-treating, the city said, would “put families and our youth in harm’s way as they negotiate piles of snow and downed limbs.”

In Springfield, Massachusetts, school officials announced classes would be canceled for the week.

Massachusetts Gov. Deval Patrick said some roads in the state are expected to ice up again after dark, and he warned that downed power lines continue to pose a threat.

“It was a particular challenge not just because it comes unseasonably soon, but because there are leaves on many of the trees, which caused a number of limbs to come down on power lines,” he said.

Some of the heaviest snow fell in Massachusetts, Connecticut, New Jersey and New York, but snowfall amounts of at least a foot were recorded from West Virginia to Maine. The Berkshire County community of Peru, Massachusetts, received 32 inches of snow during the storm.

“I never have seen this, and I’ve lived here all my life, and that’s more than 90 years,” 92-year-old Genevieve Murphy of Westfield, Massachusetts, said in an interview with CNN affiliate WWLP-TV.

Aaron Kershaw in Mahopac, New York, about 50 miles north of Manhattan, told CNN he was using a 4,000-watt generator to provide power for his family of five.

The wet, heavy snow brought down a number of trees while coating the area in a thick blanket of white.

With no electricity and no heat at home, Jessica Taylor took her six children and spent the night in a shelter in the Hartford area.

“We’ve been eating meals here,” she told CNN affiliate WTIC-TV. “They’ve been serving us, taking good care of us.”

Connecticut power officials said Monday that about 748,000 people were still without power, down from a peak of more than 900,000.

“It’s all hands on deck,” said Mitch Gross, a spokesman Connecticut Light and Power, the state’s largest utility. “We have a lot of work to do.”

Power crews from across the country are converging on the state to help restore power, according to Gross, who said every town that Connecticut Light and Power serves was adversely affected in some way by the storm.

“A 23% reduction overnight is pretty great, but we have a whole lot more to do and a few days yet before power will be restored to everyone,” Patrick said.

About 478,000 people remained without power Monday evening, according to officials.

Elsewhere, about 202,000 customers were without power in Pennsylvania; 116,000 in New Jersey and 127,000 in New York, according to figures from emergency managers and power companies in those states. Thousands also lost power in New Hampshire, Maryland, Virginia and West Virginia.

Kimberly Lindner of Chappaqua, New York, said the family whiled away the hours by building a “jack-snow-lantern.”

“It’s October, and there are 12 inches of snow on the ground,” she said in a submission to CNN’s iReport. “But the kids think it’s great. They’ve been playing outside all day and really don’t care that there is no power. Why not make the best of things and have some family time in the snow? A snowman without a head, a jack-o’-lantern without a body … enough said.”

For others, however, the unexpected storm brought unexpected misery. Airline passengers left stranded by the storm spent a restless weekend night on cots or airport floors.

“Whatever kind of system they had, it completely and utterly broke down,” said passenger Fatimah Dahandari, who spent a night in Hartford, Connecticut’s, Bradley International Airport while trying to get to New York. “It looks like a refugee camp in here.”

Worries about high tides overwhelming parts of Thailand in recent days have morphed into fears about water- and insect-borne diseases in the flood-ravaged country.

Bangkok’s central business district has avoided major flooding so far, but outlying areas are chest- or waist-deep in water.

“The water in those parts is a filthy black color containing sewage, garbage and dead animals with a nasty smell. Mosquitoes are also breeding rapidly,” said Igor Prahin of Bangkok.

More than 370 people have died since the flooding began after heavy monsoon rains.

U.S. Ambassador to Thailand Kristie A. Kenney said Monday that “the worst may be over for central Bangkok,” but about 2 million people are still affected by the flooding. The United States has pledged a total of $1.1 million in aid.

Charities working in the country have warned of diseases such as diarrhea, dengue fever and malaria in the coming days and weeks.

“There are places on the outskirts of Bangkok and in other parts of the country which have been flooded for nearly two weeks,” said Matthew Cochrane of the International Committee of the Red Cross and Red Crescent.

“The country’s prime minister has said that the city has ‘dodged a bullet’ — the economic impact of central Bangkok being flooded would have been huge, and thankfully that did not happen — but a huge part of the country is still under water,” Cochrane said.

Thailand flood explained “Outside the city it is certainly a humanitarian crisis, because there are people who have been cut off for weeks without any aid, supplies or food.”

UNICEF said it was providing 20,000 mosquito nets and handing out 20,000 pamphlets explaining how to stay safe and healthy in flood-stricken regions. The Red Cross said it had provided more than 130,000 relief kits, and 120,000 packs of bottled water, but representatives in Bangkok said they were concerned at the lack of food and drinking water in communities isolated by the floodwaters.

Supatra (Jenstitvong) Assavasuke, who lives east of central Bangkok, took in two friends whose house on the west side of the city is submerged under 1 to 2 meters (3 to 7 feet) of water. It’s unclear how long they will need to stay.

She and her family have helped donate about 3,000 liters (almost 800 gallons) of drinking water to those in worse-off areas.

But even those in the capital faced possible shortages of water.

The Metropolitan Waterworks Authority said it had reduced the amount of tap water processed for residents from 900,000 to 400,000 cubic meters per day, because of high algae counts at one of its plants.

Prime Minister Yingluck Shinawatra said authorities would speed up the process of draining water into Bangkok’s canals and into the sea, raising hopes that water levels in the city could start to sink. However, the government has warned it may take more than a month for the floods to recede.

Already, the flooding has caused an estimated $6 billion in damages, the Thai Finance Ministry has said.

The Thai government has set up more than 1,700 shelters across the country, where more than 113,000 people have taken refuge.

Yet many are trying to push through with their daily routines.

In Bangkok’s Chinatown area, a food vendor up to her knees in murky water continued to serve patrons at her small cart.

One resident traveled down a street by row boat as a nearby bicyclist pedaled through thigh-deep flooding.

And a man walked his dog near Bangkok’s Grand Palace, the dog chest-deep in water.

– Visit www.CNN.com for more on these and other international weather stories